Ok I've held off for as long as I could, was very tempted to write this last weekend straight after the game but that would have been full of negative thoughts and no constructive criticism..

By now your reading this knowing the result wasn't what I had expected or hoped, yes my boys lost.

The wound goes deeper than just the loss, earlier in the day I made my long awaited come back to football, I last pulled on the boots some 12 years ago, back then I played my last season with the Vikings and kicked a nice 50 odd goals in only 10 games, including my never to be forgotten 10 goal haul against Christies Beach (in just 3 quarters of football...).

Knee injury was the reason I stopped playing and also I met my wife to be and moved 20km's away from the footy club, I was spending more time doing other things and sadly football lost. My knee wasn't right though, I spent my last season of football at Happy Valley with a massive knee brace which was awkward to move in and took about 10m off my old 60m kick...

Since then i've moved to a local club, Broadview Football Club (Tigers!!), my son has been playing junior football there for the last 5 years. Talking to one of the members he mentioned their D grade were short of players so I had a few days to think - yep lets do it..

Now, I'm atleast 20kg's heavier than last time I played, no where near as fit and 12 years older... My first training session everything was great, the next few days though - pain, just pain - body wasn't ready for such a training session hahaha. Over the course of the week I then had niggling issues, first the hamstring, then my driver but was still confident of overcoming these and lining up for the Tigers.

That I did, I got my chance to hit the ground midway through the 1st quarter and slotted into the forward pocket - very unfamiliar ground, most of my footy at HV was at Full Forward.. From the time I jumped on though I had nothing but hesitation in my mind, new club, new players, hadn't played for years... I just didn't know my place and what I should do - sadly two leads in the groin went... I hobbled to the bench at quarter time and rested it up. I guess to my credit (and a stern pep talk from my wife) I got back out there midway into 3rd Quarter and it was then I had my first shot on goal as a Broadview Tiger.

Sadly it just went shy of the left post and a point awarded, I finished out the rest of the game getting my hands on the ball a few times but in the end it didn't come down that much as we were soundly beaten by 18 goals... infact, that goal I missed, would have been our first and only goal for the game...

So - missing the 1st half of the Richmond game I sped home, sore and a gutted feeling... 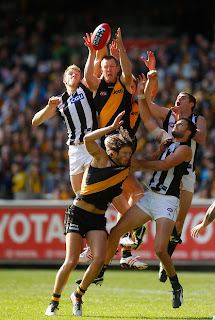 Listening on the way home I heard the Tigers had a great first half matching Collingwood and allowing our midfield to dominate again - sadly the same issues from previous weeks reared their heads again... Missed Scoring Opportunities.

I hope this is a sticking point for Dimma at training and something he is focussing on as at this level the amound of easy shots on goal the Tigers have missed this year is disgusting. Tigers at the moment are content on just doing enough to maintain a lead rather than going for the kill and murdering the hopes and moral of the opposition.

Unfortunately what I saw when I got home and sat and watched the last half was nothing short of poor, this is harsh but I think the 3rd quarter we saw last weekend was by far the worst we've played all year.

Collingwood hit Richmond hard, their midfield dominated the centre and flooded it into their forward line where their million dollar focal point was winning a tough battle in the air against Alex Rance. To Rance's credit he fought hard, unfortunately the arm reach of Travis Cloke is a tough one to defend against, he has great hands, sadly I wish he came across during last trade period! 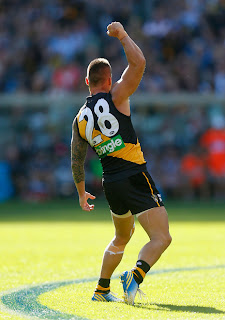 Rancey was given a spell and Chappy took over the duties on Cloke, sadly by that time the damage had been done, Collingwood piled on the goals and took a 4 goal lead, but by that stage our heads were already down. Chappy was the next casualty of the onslaught taking on some friendly fire to the head in a clash with newby Chris Knights.

Collingwood piled on 8 unanswered goals during that quarter and I watched in amazement as one of our best midfielders, Dustin Martin fell into his 3rd quarter curse and began increasingly quiet as his player Harry O'Brien ran freely and aided Collingwoods demolition.

To the Tigers credit they managed to add 2 goals late in the 3rd quarter to somehow still be a chance.

Even though the quarter was done and dusted, heads in the sand, there was still a feeling we weren't done and early goals would worry Collingwood...

Tigers started fresh and pushed the ball constantly into our forward line but 4... i repeat 4 early chances, some easy shots, were missed. We finally added a few through the two big sticks and crept to within 3 goals but by then the damage had been done, the early misses cost us again as Collingwood regrouped and surged again adding a few and then doing enough to keep Richmond off and securing the 34 point win. 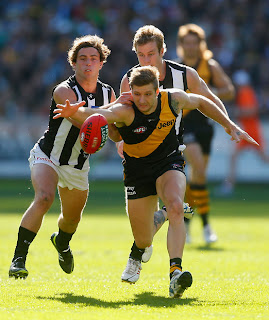 34 Points doesn't really give Collingwood the notion of how dominant they were in the last half, 11 goals to 5 doesn't depict the 3rd quarter fright they gave the rest of the competition after they had 8 unanswered goals and looked unstoppable.

Highlights for me in terms of best players, the ever reliable Cotchin, Lid's tried hard, Grimes and Petterd. Ricky Petterd isn't featuring in the Tigers so called Best players which is a shame, his addition to the team this year has been nothing but positive, he's been getting his hands alot of the sherrin and his disposal has been quite good.


Looking at the Best players below i'm shocked to see Bachar Houli in there, his last half disposal was terrible which is a big shock considering I believe him to be one of the best out there. His first half must have lifted him up there cos sadly my Bachar didn't impress me...

How do we beat Collingwood next time, or even look ahead to Freo, Geelong and Port? 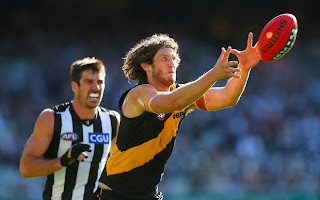 The answer is simple, our shots on goal. 11.13 is a terrible result, I saw 4 points that should have been goals atleast but thats not the only example, look back to the Carlton and St Kilda games... Early in first half we had them both dead and beaten - shocking misses though didn't bury them and kept them within striking distance. Yes the result was we won, but we didn't win convincingly like a Top 4 team like Collingwood, Sydney, Geelong or Hawthorn would do.

If we are to be one of the teams others fear, we urgently need to rectify issues like this, we can't in this our season of change, allow us to have so many close games when really we could have thrashed them.

Well, this week we're out at Freo on Friday night, should be a cracker of a game, I actually think we can win this providing our midfielders maintain for four quarters and we start hitting easy shots and get the goals up!

Players best be on their A game, we have the likes of Aaron Edwards booting 7 in the reserves and we're also expecting the debut of Nick Vlastuin this week... Nathan Foley also had a good hit out, expect him to return in a month's time if all goes well... CHANGES
Collingwood: Goldsack replaced in selected side by Macaffer