I was thinking about this last night, why have I not written an article about possibly my most favourite game of all time! 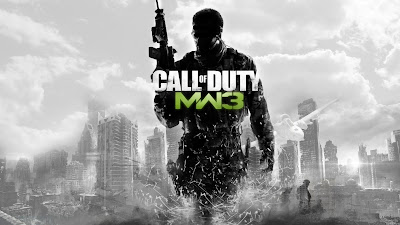 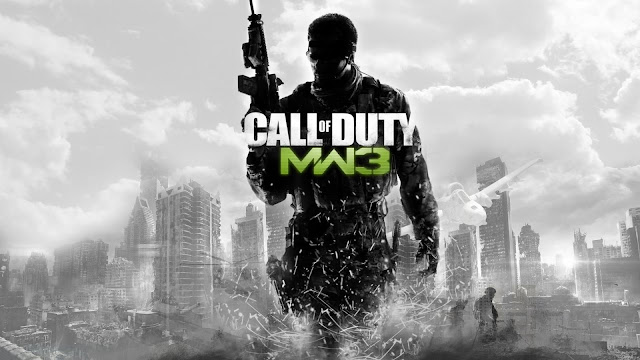 Years ago I was sitting at home playing Star Wars Knights of The Old Republic on my then Xbox when my brother in law asked if I had bought the new Modern Warfare 2 game and played it online. I said no as I have an Xbox and haven't bothered to buy a 12 month access to play online but hadn't really played much of the COD series as yet.

I went down to his place and he showed me the PS3, I did consider getting one as I heard the graphics were better and it had a Blu ray player also but I ended up going with the Xbox for 2 reasons, 1) It was by far cheaper and 2) It had Knights of The Old Republic... 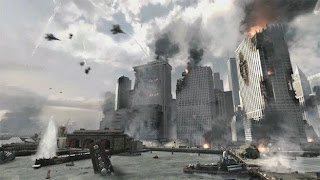 We played Call of Duty Modern Warfare on split screen and online, I asked how much it costs per year for online access and he said... nothing... I stood there like a stunned mullet, nothing??

I loved COD, it was unbelievable - Immediately I was hooked and was now on the hunt for a PS3.

A few months later my Xbox died with a bad lens or something the repair man stated, the cost for the new parts was substantial and thought well why spend the $$'s on something I want to get rid of anyway so immediately began the search for the best available priced PS3.

Luckily it was Xmas and both my boy and I had been good that year so Santa decided he would give us a joint present and delivered us a brand new PS3.

News broke of the next instalment of the COD series was due for release shortly, Modern Warfare (MW) 3, I hadn't even played 2 yet so we immediately bought a copy and began our "Free" online journey. 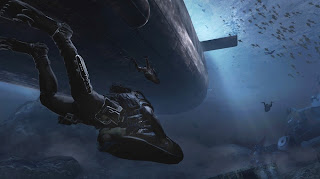 MW2 was great, I absolutely loved it, so did my son, as we began to play Team Deathmatch religiously for the next few months in the lead up to the release of MW3. My brother in law, at that stage, talked me into using the SCAR-L as the main weapon of choice, I agreed after a few games using it. The makers for me had this as one of the nicest ones to use whilst it calmly stayed on target with hardly any kickback.

Issue for me was the Kills. I had a habit back then of quite simply running into the kill zone and getting killed by much more experienced players, instead of learning the map and learning what way players usually will run to and spawn from.

With our pennies saved up (Aussie $$'s actually...) MW3 was released.

I already loved playing the Campaign of both MW & MW2 and was really looking forward to where the story was going for this one, the thing I love about the COD series is the storyline in which it has moved - I never really got into the Black Ops versions but found MW to be a brilliantly told storyline which I had hoped a filmmaker out there would take note of and have a trilogy brought out! 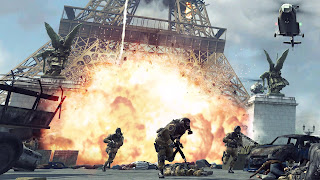 MW3's storyline was outstanding, starting with the evacuation of MacTavish in Afghanistan, to then help reclaim US states recently occupied by the Russian invasion.

Alot of people could have said the game could be centred around the reclaiming of the US but the developers didn't stop there. The team lead by Captain Price, Yuri, Nikolai & MacTavish go hell bent on tracking down the main cause of all of this devastation, Makarov.

The team journey through the far reaches of the world in their pursuit of Makarov going on tips of his whereabouts as they cross through Sierra Leone, Somalia, Prague & Dubai.


The developers didn't stop here as in true COD nature you also switch players and spend time fighting with Team Metal lead by Sgt Frost whether your in Lower Manhatten helping blow up a Russian Sub, destroying a jamming tower on top of the New York Stock Exchange or fighting for survival in Paris!

The ending is just unreal, 3 months after the war has finished Price, Yuri, and Nikolai finally track down Makarov at the Burj Al Arab hotel in Dubai. Price and Yuri, dressed as Juggernauts, make their way into the hotel and proceed to the top level in pursuit of Makarov just as his helicopter is approaching for escape. As they make their way through the atrium and casino a Little Bird decimates the upper levels of the hotel and as a result both Price & Yuri are badly wounded, Yuri infact is impaled on a metal rod. 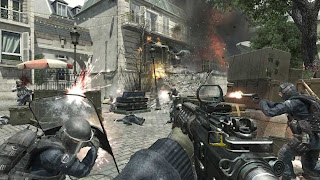 Yuri insists Price goes after Makarov and reluctantly he does, Price proceeds to hijack the escape helicopter and kills the pilots - but in the process the controls are damaged forcing it to crash land on the roof where Makarov is waiting. Makarov, just about to end it all for Price is seconds away but is confronted by the badly wounded Yuri who manages to buy time for Price!

Sadly, Makarov is able to defeat and kill Yuri. Yuri's actions and heroic feat was able to give Price enough time to gather himself and wrap a steel cable around his neck. Price then smashes the glass floor under them which kills Makarov!

Price survives the fall and smokes a cigar infront of his corpse.

Brilliant, just absolutely brilliant - it was a joy to play and kept you on the edge of your seat the whole time. If they don't make a proper movie about this then there's something wrong, a full trilogy or full movie would be brilliant and millions would flock to see it.


But the developers for me really topped the cake with the Multiplayer menu.

Multiplayer allows you to jump online and fight alongside and against other players from all over the world, at any point during the game I am fighting with and against fellow Australians but also could be people from America, Britain, India, Russia, France etc.

At the start you are given basic guns and add on's to help you begin your journey to Level 80. You not only increase your experience but also the weapons too. Each time you reach the next required level for items you can gain cool stuff to add to the guns like a ACOG Sights, Extra Mags, Silencer etc.

Strike Packages also allow you awesome bonuses when you get on a kill streak, you have the option to select Assualt, Support or Specialist. 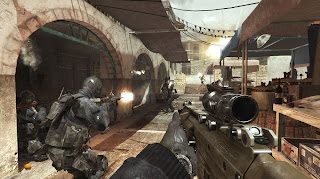 Assualt requires you to record multiple kills without being killed, with each streak you get too you gain your selected items such as Care Packages, Juggernauts etc.

Support allows you to gain items whilst still being killed, beauty is it doesn't reset after each time you get killed.

Specialist is another which resets after each time you die, so the more experienced and stealth players generally use this - this package gives the player perks for optimum performance.

Once you get to Level 80 you can Prestige, the Prestige allows you to reset back to Level 1 but use a token each time to buy items to keep going forward. So if your a big fan of a certain weapon you can use your token to buy it to use once you've Prestiged.


As far as I'm aware there is no set limit on the amount of times you Prestige, currently I think we've Prestiged 12 times and have racked up a heap of cool weapons to use. 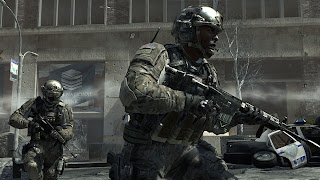 The Maps that the developers have added are just awesome too, the original Maps contain differing levels for each type of player. Some Maps are awesome if you prefer Sniping or running through with Akimbo machine pistols for quick kills like in Hardhat.


My favourite Maps right now are Hardhat, Seatown, Terminal and Dome. Hardhat & Dome I love running through with Akimbo machine pistols and an MP7 - these maps are generally where I rack up more kills than others as I tend to go hard in getting kills. Seatown & Terminal I tend to be a bit more reserved as I prefer to use my Sniper rifle and see how I can go without getting killed as much.


There is a plethora of different ways in which you can play the Multiplayer Maps, through the basic games such as Team Deathmatch, Team Defender, Domination or you can join the Hardened Menu's and take on the elite.

It also gives you a zombie type game called Infected, at the start of each game the countdown will begin to chose who will be the first infected, players are given set weapons and the first infected keeps that weapon selection to enable them to infect one player to even up the playing field. Infected can be great fun and the games can be quite quick as the infected bolt through with extraordinary speed to knife the unsuspecting victims but it can also be super slow, especially when its Striker v Jugg... throw in Dome and you've got 10 - 15 players all camping up on top of the Dome in Jugg outfits whilst you try like crazy to get up and kill them... Not the easiest of tasks and can be boring if you get it continually...

For me I love having sessions of Team Deathmatch and Domination, there you can either go your own pace like on TD or capture bases on Domination then slaughter the opposition whilst you attempt to hold the base. 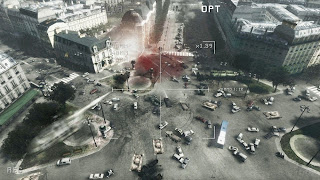 Using the headset can be a fun feature, especially if you have a group of friends your keen to chat too, good way to catch up whilst also having fun playing this awesome game. It can have its downside also however, there are alot of extremely rude, arrogant and disrespectful people out there. And even when you report them for Abusive language or something similar nothing seems to happen.

In the end we mostly just mute players now and don't use the headset anymore, just not worth getting in an arguement with a player from the US just because they got upset for being killed hahaha.

One thing I would love the developers to do is to create an extra menu for Multiplayer to put players off against each other Nation versus Nation. Not a daily thing but even like a Fortnightly or Monthly thing, let players sign up for their Nation and allow their points, kills etc to be applied to an overall tally and see which Nation is the best COD players for that period.

Doesn't have to be exactly like this but something similar would be awesome. It's not a compulsory item but a nice addition just to keep everyone interested.

Not that that will be a concern, since I bought the game this is all I have pretty much played. Briefly we will play MLB The Show, AFL Live, FIFA and maybe The Walking Dead. But they are usually brief and a session of COD is always on the cards.

Either way I'm sure once you play this game for the first time it'll be one of those games you just can't turn away from!

I've used photos from the COD website however will try and jump back in at a later date and get some screenshots from my COD login!

I'm going to leave this now and get back to my next session of COD - hope to all see you on there at some stage - look out for me - Bo_Gas.
Posted by Unknown at 9:22 PM