Been a while since my last post, sport and work seem to have taken up alot of my time of late.

Last weekend was the first "At Home" one we've had in some time, I wanted to make sure I didn't fall into the old ways of lazy weekend at home so let's jump on the PlayStation. 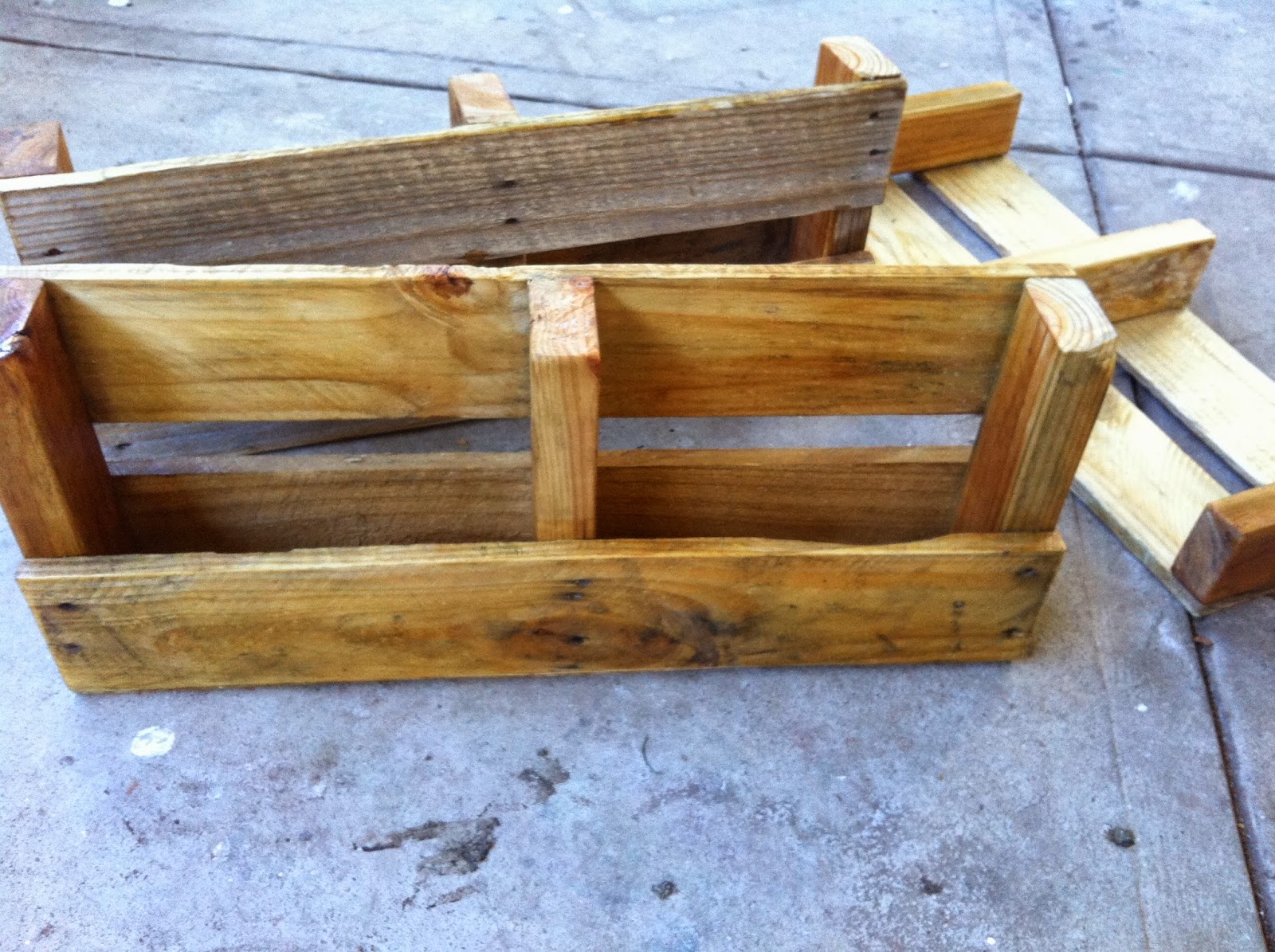 My wife and her child care centre are really getting behind the concept of building stuff with recycled materials such as timber pallets, so she asked if I wouldn't mind chopping up one of the pallets to be varnished and re-used as book shelving.

No worries at all! This helped me re-discover my old circular saw which has been hidden away for some time - I was delighted to find it still works beautifully! Out of the one pallet you can make 2 shelves, however there is enough left over for you to almost make a third, if you do attempt this it's good if you have a couple of pallets being used for the main task then one or two sitting by for spare parts... I chopped the two and a third up and sanded them down with my orbital sander.

My wife then applied the varnish (2 coats) and they look a million dollars! 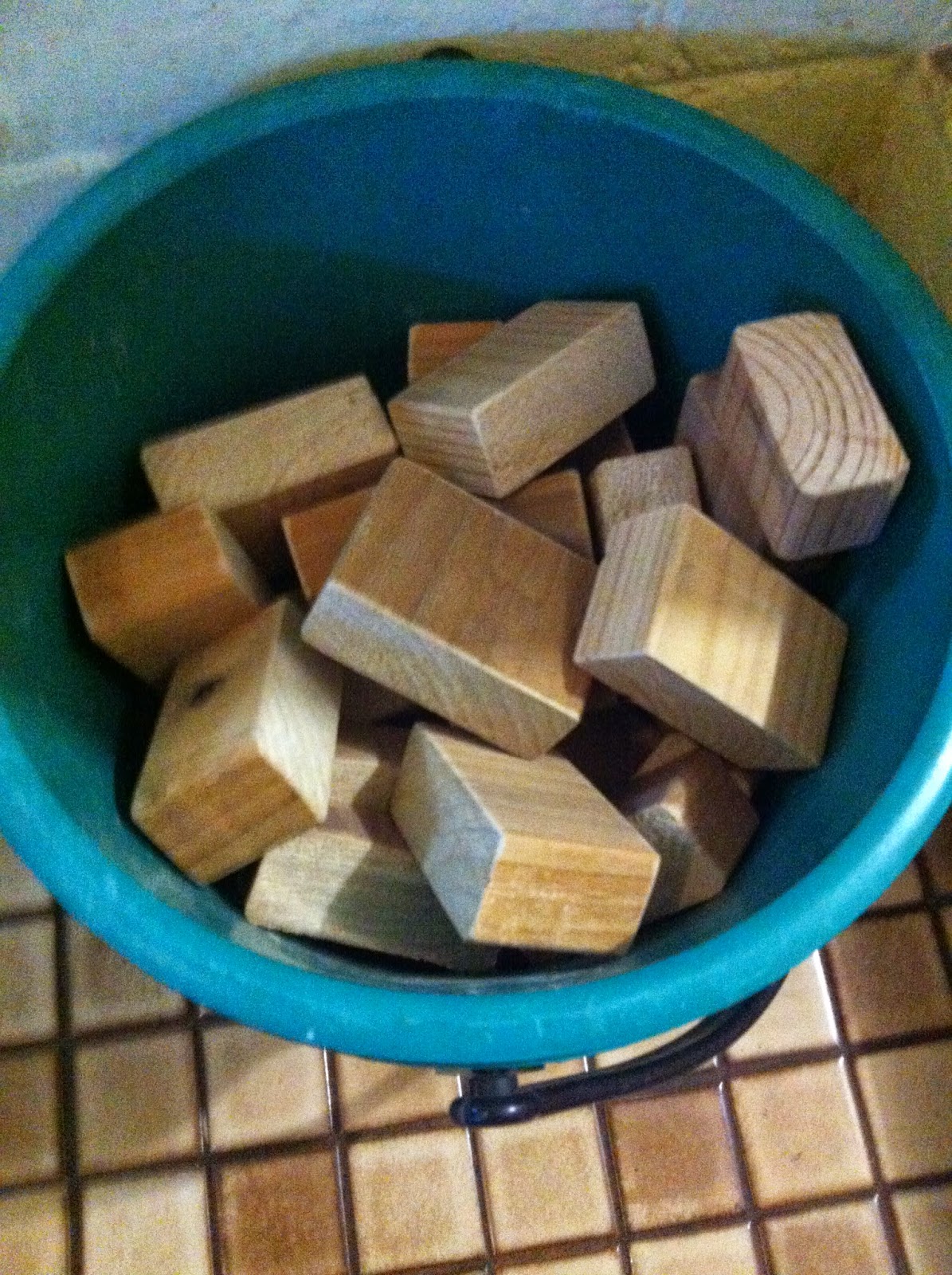 Whilst sitting by my bench my wife also noticed a heap of scrap wood which was collecting saw dust, she asked if I could cut it all into different sizes for the kids at her centre to build with. Genius! Why didn't I think of that! So I cut down a heap, I think in total there was about 40 - 50 blocks but enough to fill this lovely bucket. I took the bucket full of cuts with some sandpaper and sanded down all the edges and the sides cut to make sure no nasty splinters for the kids.

Word is they received the bucket today and absolutely love it!

Our next project was to liven up the scrap pile which was semi-made for the chickens to get in, pick about the scraps and help turn a patch of soil into a lushish worm filled plot to be used for a veggie patch or for spare soil.

In one of the big storms we had late last year we lost our timber pergola out back, the storms were quite savage and as such knocked a tree branch right through one of the main parts, Being unable to fix I decided to pull it down and salvage the parts.

I went around to the local Bunnings and bought some metal rods the guys use when laying concrete, drilled a hole at each end of the timber poles and knocked the rod through to secure. That easy, and the best thing, we're utilizing recycled materials.

I then asked my lovely children to each give me a hand and we dug up the plot, turned it all over and planted Potatoes, Parsley, Celery, Brown & Red Onions and Carrots. Not art work but it at least makes this part look a tiny bit better. 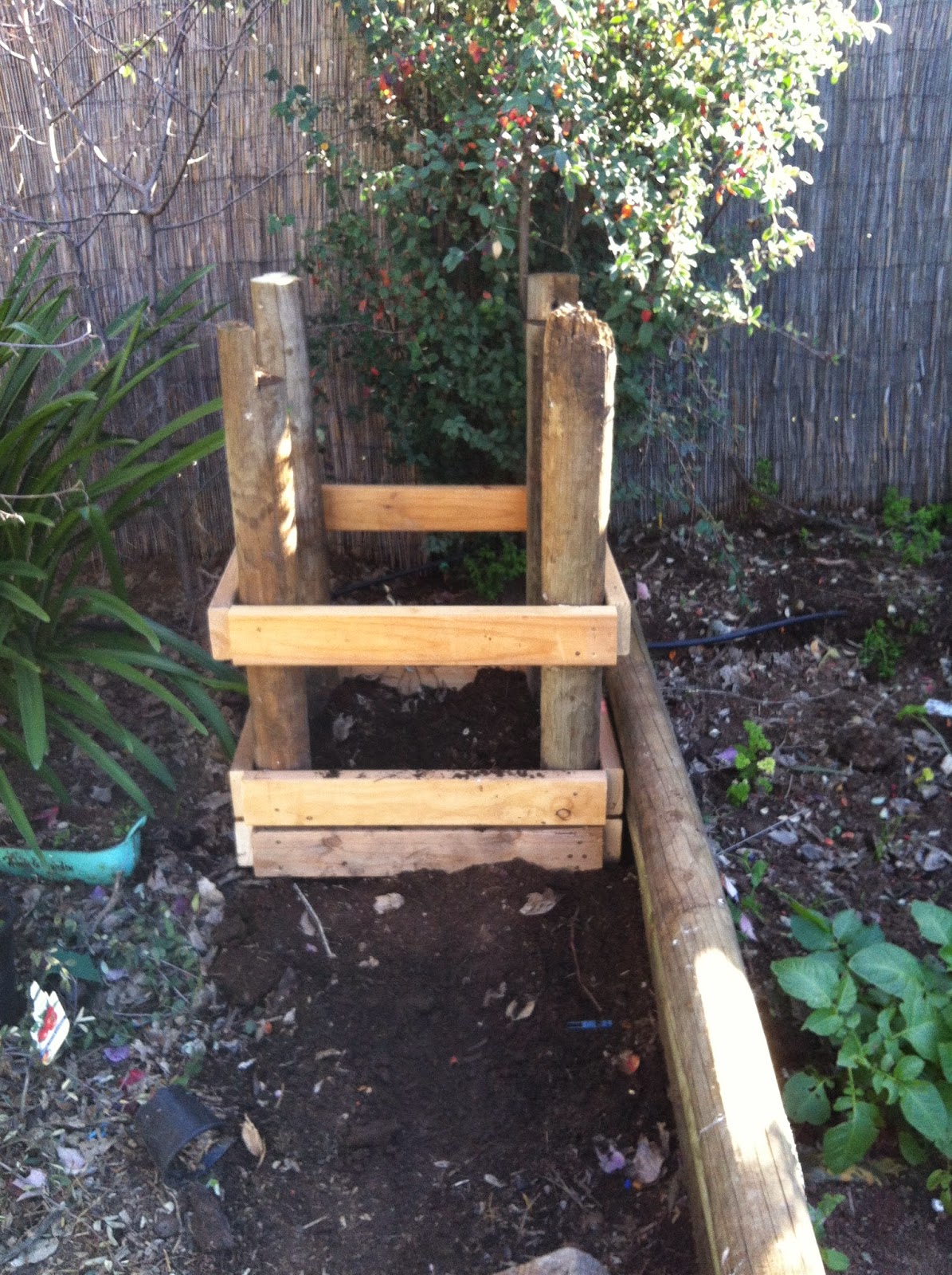 Last but not least is an idea I've been keen to try for some time, the Potato Tower!! Using old wood in the shed and poles left over from the pergola I wanted to create the tower to plant potatoes. The theory I've read online is to start them low in the tower, let them grow up, then add more soil as the plant gets tall.

By adding extra soil the plant then generates more potatoes. As this occurs I keep adding extra lines of the wood - thus creating a big tower filled with potatoes!! Here's a photo of the finished product, as you can see I've added two panels at the bottom and one about three up from there - just to provide a bit of stability to the frame. 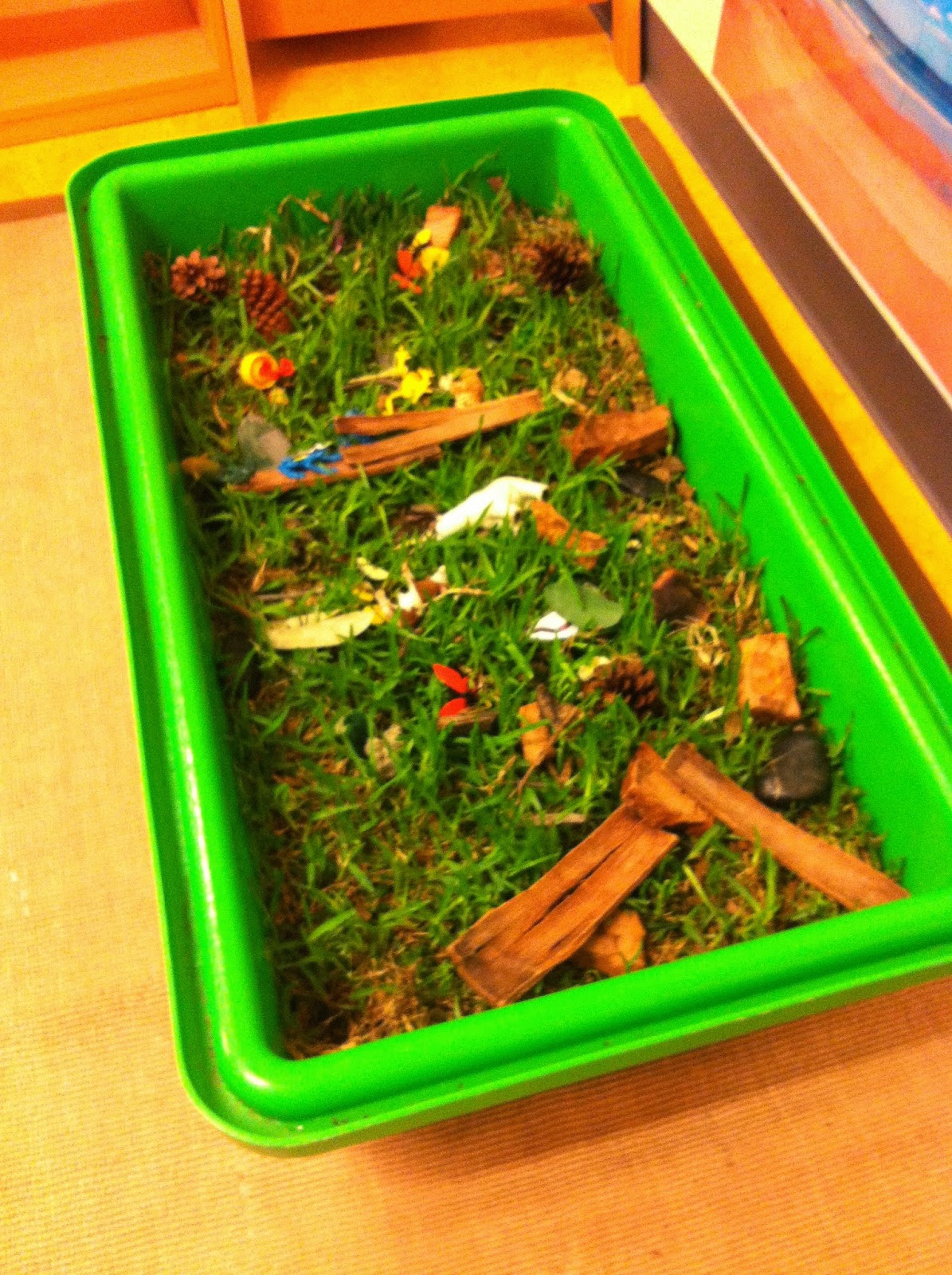 It is truly amazing the things you can do when you open your mind to the world around, here's a couple of things my wife's child care has done recently.

Here in Adelaide its quite cold and wet whilst we're in the middle of Winter, so the childcare centre brought the lawn inside!!!

My wifes boss at Emali Child Care Centre (Broadview) created this gem by simply getting a container, then heading to Bunnings and buying a strip of pre-grown grass they have turned a boring old container into something the kids can play with and explore their senses by allowing them to touch and feel but also grab the old scissors out and trim it - best thing is, with a bit of water and the kids grooming, it continue to grows! 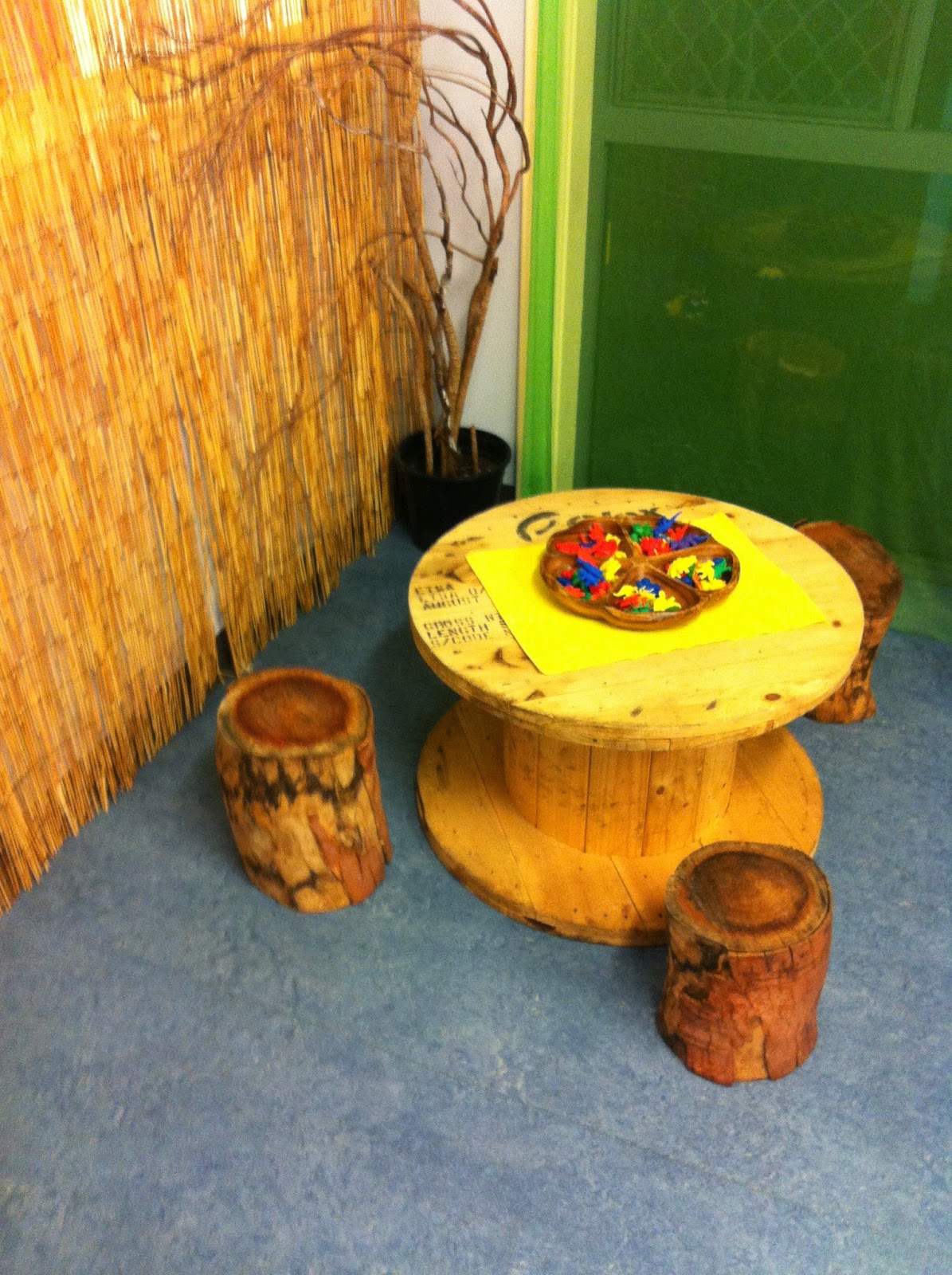 This probably isn't as exciting as the above but for me, I love it!

This once was an empty section of the room which has now been transformed into somewhere the kids can sit and play/draw, they've converted an old wheel that once held wire/cable and they've also added old tree stumps as chairs! Sanded down so no splinters this gives a lovely new area to sit and chat.

Good Luck and I hope some of you get a chance to try something like above or gain inspiration for recycling items for re-use rather than shoving into the waste!

Tony
Posted by Unknown at 11:29 PM No comments: