Tigerland is a buzz at the moment with supporters and the media going nuts over the boys sitting 2 wins and no losses at the start of the season...

One hoodoo down our Tiger boys set firm target on the lowly Bulldogs, we haven't won our first 3 straight games since our dominant year of 1995, the year we almost made the Grand Final...


Cotchy headed to the centre of the ground for the coin toss, just as one of our lasses botched the initial toss... finally the toss had been corrected and we got the result we wanted.

Much anticipation surrounded the first quarter, the third is usually the one to nail the game but it was super important for the Tigers to stamp their dominance early... 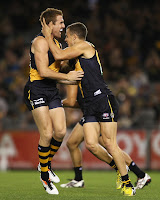 And that it did, the ball fell into the hands of Brett Deledio and he sprinted towards striking distance and launched a ball some 60+ metres and it went through one bounce for a goal.

Experts are stating that was the quickest goal in AFL history, TV commentators are saying 14 seconds, when I was watching the clock on the TV it looked more like 10 seconds!!

Absolutely one of the best goals i've seen, nothing better than watching a midfielder with a huge burst of pace, bounce the ball all the way through and nail the goal.

The Tiger army was certainly in full voice, but sadly we failed to capitalise on our opportunities. Again, as we did against Carlton & St Kilda - we were extremely inaccurate infront of goal, missing some very easy chances. Dimma roared into the group ruing the missed chances...

At the end of the first quarter we finished with 9 points and only 4 goals to show for ourselves. Extremely disappointing given the early dominance of Deledio, Martin, Cotchin, Houli, Grigg etc... just to name a few...

Second quarter started and the Tigers were threatening to move, but just couldn't shake the Bulldogs as we only scored 3.2 for the quarter, again missing some easy shots but also a bit sloppy and turning the ball over. 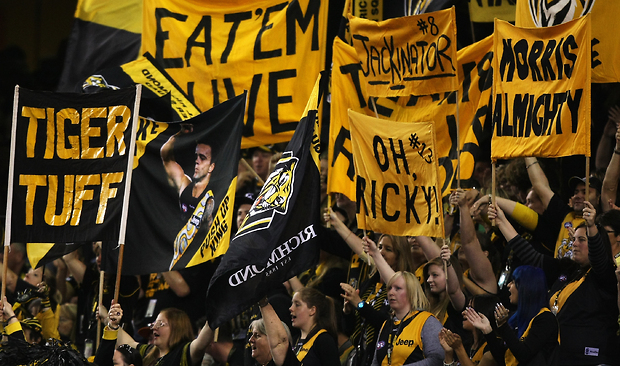 Third quarter came and so did some relatives.. haha, I sadly missed a fair bit of the third quarter but thanks largely to the AFL app for the iphone, I managed to keep abreast of the score and could see we piled on the goals to extend the lead further by another three at three quarter time. 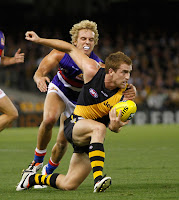 From all reports, the main group I mentioned before lead by Cotchin, Deledio and Martin were having a field day, the new comers Chaplin, Petterd and Knights also were having an impact across the ground.

Fourth quarter started and it was time to get rid of the Dogs although they managed to put the first two majors on the board. From then though it was all Richmond, piling on 7 out of the next 9 goals to run out victors by 67 points.

67 is closer than I expected, I really thought we again missed crucial chances to put them away early. Like all other games these early misses can dent the game but our midfielders were completely dominant this round and the Bulldogs had nothing to show for it.

Deledio, Martin and Cotchin were outstanding, Grigg & Houli threatened an entrance in the top 3 players but was hard with the efforts of the first three.. I found it really hard to find players that didn't perform on the day, it truly was a team effort.

Jumping Jack showed some great aerobatics pulling down a couple of great pack marks, Luke McGuane again was a key forward threat and Ty Vickory made his presence felt. Little Shane Edwards booted 2 and was a little livewire along with Jake the Push Up King!

Standout for me though was Deledio, he was just a joy to watch as he sped through the middle of the ground on numerous occasion's, acting as a conduit between the backline and the forwards. He has sat behind the likes of Cotchy the last few games but I reckon he pushed ahead this game.. 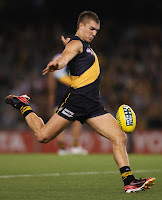 You know,  its a damn exciting time to be a Richmond supporter when you look at your midfield led by Captain Cotchin, Brett Deledio, Dustin Martin, Shane Tuck etc. The amount of talent each one has is unbelievable. Each has the ability to change a game completely and when all are firing it is simply a lovely game to watch.

Well we know shift focus to Round 4, a massive massive clash against Collingwood. I've said this alot this year especially against Carlton & St Kilda, if we are to be Collingwood, this is the year to do it.

Some very interesting match ups will be made, I'm hoping the boys can stick closely with Collingwood until half time, keep the pace and energy in reserve and then nail them hard in the 3rd quarter. My prediction, Tigers by 18 points. 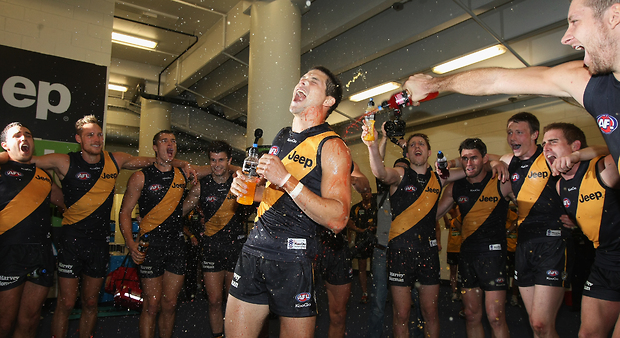 So Final scores for Round 3:


From this week onwards I'll start adding extra stats to each Round: 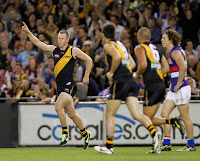