A couple of months ago our family attended "The Mervy", this is considered a very prestigious and important day of the calender for our family, as it is a golf competition setup in honor of our nephew Jackson.

Jackson sadly passed away
during birth, this hit us all very hard - none more so than his parents. Family and friends banded around Dan & Bec, who with great strength and with each others support, pushed through this tragedy stronger than ever before.

Our family has always considered golf to be the pinnacle in measuring the "chief" of the pack and quite often we would get together to play off against each other.

Dan came up with the idea to make this an annual event in honor of his son, this was a brilliant way to remember Jackson.

In previous years we've played at different venues such as South Lakes down @ Goolwa as well as Clare Valley Golf Club, this year the move was to bring it to the city and it was decided to play at Adelaide Shores. This way family can stay over at the caravan park while a few of us who live locally can drop down.

My history in The Mervy has been good in my opinion, I won the "Naga" in the first year, this is awarded to the player who comes last. Since then i've moved to the middle of the pack and last year recorded my best result coming 2nd to Bec in a close game.

Some considered me to be a massive threat this year, I couldn't see this as since last years game I think I had played maybe 2 or 3 times...

This year my son Noah joined us to play in his first official Mervy, originally we were going to make a Junior Mervy however the rest of the juniors stayed at the caravan park. I was very proud of my boy for deciding to play, the lure of a water park and bouncy cushion is very hard to look away from but to his credit he didn't even think twice.

Noah is now 10 years old, he is the sort of boy that is very talented at sport - whatever the sport, he manages to pick it up very easily. Baseball this year he hit a staggering 0.904 batting average (that's 9 in every 10 At Bats for those not used to baseball). Football he has a raking left kick and is looking at a strong year. Golf of late he has started to hit more consistently and is already showing off his early power.

The Mervy kicked off like every other, the previous winner tee'd off to begin the festivities, Bec however this time snuck up without anyone noticed and smashed a long bomb up the middle of the fairway - Cudo's to her as teeing off with an audience is not fun haha.

I was partnered up with Noah, Simon, Uncle Graham and Dan - a very strong line up!

First tee off was terrible and I immediately thought, there goes my chances... Tee'd off with a huge hook to the right... into the water. I hit a 2nd ball with the penalty added and luckily it was right up the middle.

I managed to calm my nerves a fair bit after a few holes, Noah was the same, and we then both started hitting quite well. A noticeable difference for me was my chipping and putting, in fact my whole game was different. I didn't want to get ahead of myself and get too excited but a huge confidence began to grow through - this was to be my year.

Noah also was impressing everyone, his drives off the tee block were awesome to watch. His approach shots were going well and he was enjoying himself, the one thing he hated doing was the putting..

My early thoughts was that Noah may upset the lot of us this year and win the comp, I knew I was playing well but he was on fire. 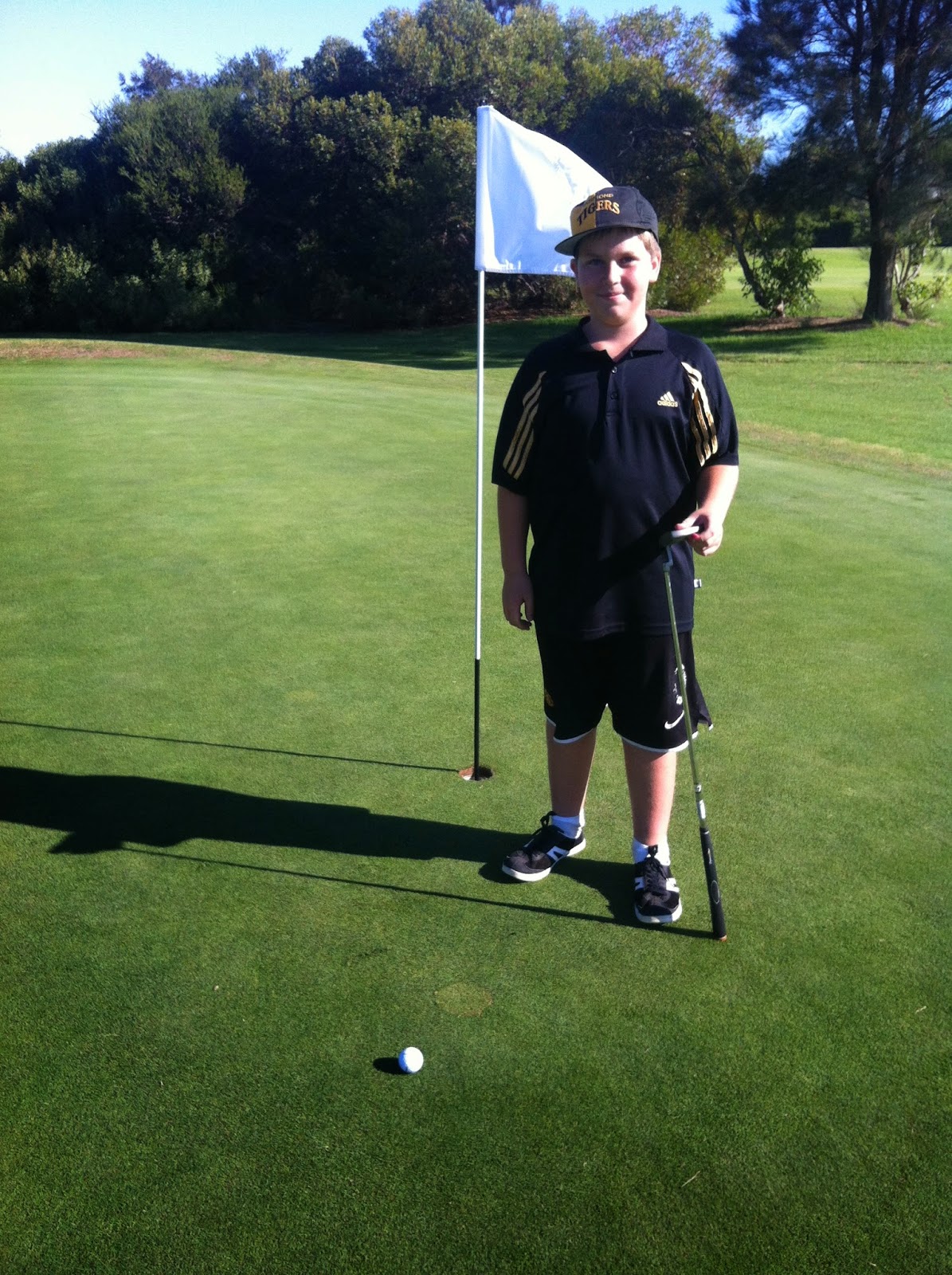 The highlight of the day wasn't from my side of golf, for me it was witnessing Noah drive a long bomb onto the 17th green and sit within a metre away from the hole. It was a Par 3 and yes easily hit to for an Adult. For a 10 year old to smash it and land on the green while the rest of the golfers were off the green or like his Uncle, in the trees... This was a massive achievement. Noah tried his hardest to get the birdie but sadly it just sailed past - he did recover though to record a massive Par! Made his father very proud.

By the time we reached the 18th I was extremely nervous but also confident I was close to winning, the game I played I couldn't have done any better if I tried. Usual shots from the bush or tree's which would take me 2 or 3 hacks to reach the green I was placing on with one shot. I knocked a couple of massive putt's also which saved Par. My approach shots and drives were good and when I did get into trouble I was able to get on the green without much problem.

In the end I finished with my personal best at Adelaide Shores with a score of 78, my previous best I think was 86. Noah finished with 106 which I think for a junior is massive.

We waited at the end to see how the rest of the players went, slowly each came off with "nah no good" or "not so bad".. I thought wow Noah and I could have a shot here.

As the players all headed back to the caravan park we each handed in our score cards and suddenly a wave of thoughts flooded through my mind, could this be the year?!? I started to stress then and question each player to see how they went and compare them to both Noah and myself.

Alot however will carefully guard their result just to further build the suspense...

We all converged back to the caravan park and proceeded with some drinks whilst we awaited the results, Dan and his Dad Phil took off shortly after the wave of Pizza's hit us and carefully worked out who would be this years winner...

Dan approached the party and called us all to quiet and began his speech, he touched on what it means to both he and his wife Bec and also why it is so important to everyone that we keep this tradition going.

First things First, the NAGA... we award this to last place, I've won it once and remember I would strive not to finish last again, the winner however, has had this honor on more than one occasion - Phil!

One by one the names were called out from Last heading up to first, neither myself or Noah had yet been called - my god, could Noah have won this?!?!

Dan ticked off some pretty decent handicapped players and proceeded to 6th place, Noah Rogers. I tell you I was stoked for him, he beat some really good players and managed to finish 6th in his first comp. He had his mind set and was determined to play a full 18 holes in the Mervy, even though the rest of the kids decided to stay in the water park at the caravan park, he looked past that, gave his all and played extremely well. He knows it, But I am extremely Proud of his effort and sad he didn't win the whole game.

My nerves had officially hit an all time high, whilst the scotch tried to counteract them... We moved to 3rd place and again my name was missing, Dan read out the final scores and I couldn't believe it, I won by a whole 3 points! 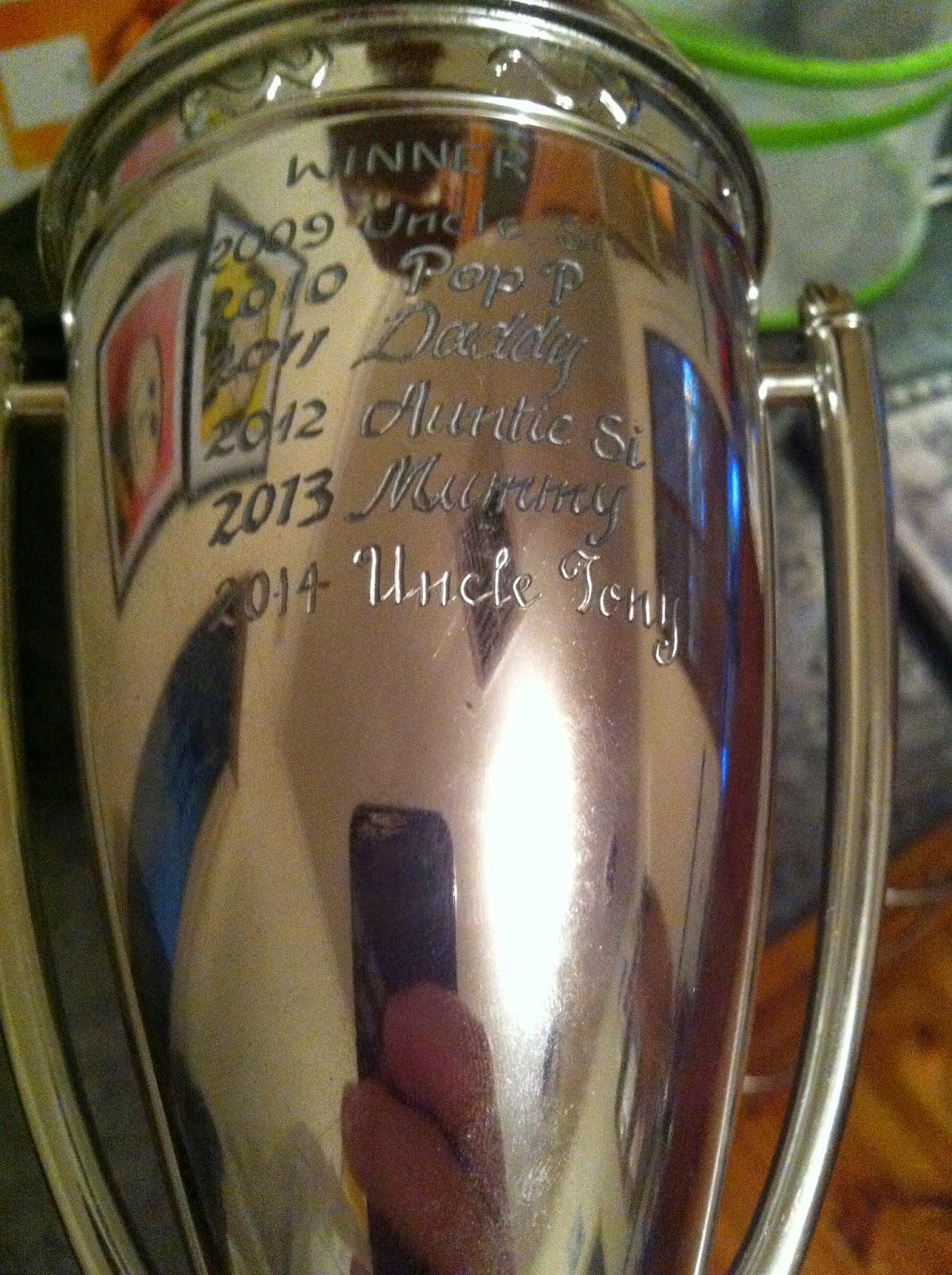 Never in my wildest did I think I'd win this comp, my family and extended family are good golfers - me, I'm a football and baseball lover, I occasionally hit the ball...

My speech was simple, I was proud I won, didn't think I would but I stood there prouder of my sons achievements than my own. I look forward to the day that he stands up here giving this speech as a winner of this prestigious cup.

So I hope you enjoyed this tale, this is a sad but happy story our entire family is involved with, we lost a family member who didn't get the chance to experience everything this world and life has to offer, or experience the love he would have received from us all - all of us have felt this pain in differing levels but none of us will forget little Mervy.


Its important to us all that we get together each year around Jacksons birthday and pay tribute to
him. I don't really know what happens after this life, but I would like to believe that when a person does pass they can still see the people left behind and pay witness to their actions, and I hope Jackson watches us each year and see what he meant to us all.

Posted by Unknown at 3:56 PM No comments: