Well Round 2 there was increased hype surrounding the Tigers, they finally ended their hoodoo with Round 1 defeats at the hand of Carlton and their cubs showed why they have the most formidable midfield in the competition. 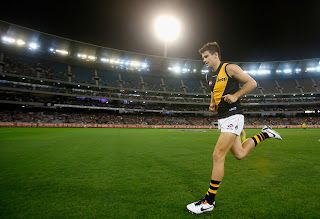 I overheard someone saying Richmond were again staring down the barrel of another record they need to overcome, They hadn't won their first 2 games to start the season in 16 years.

That's a massive amount of time to chalk up 2 wins from 2 games... I was sure that was wrong as there has been seasons where we started really strong then fell over in final 10 or 12 games.. Nope the record books has it correct.

So again the hype surrounding our great club was truly peaking and so were the hopes and ambitions of some 50,000+ members.

St Kilda, after their loss to Gold Coast the week before, was expected to show alot more fight however their fitness was a concern as the conditions up in Queensland were quite humid and hot with a number of players going down with cramp in the final quarter. 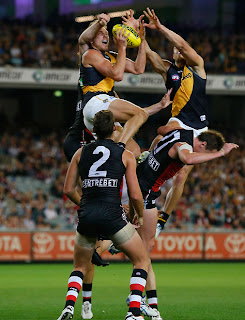 Luke McGuane showed real glimpses of being one of our power forwards with two ripper pack marks and snaring a couple of goals whilst Dustin Martin was busy early having the ball sticking to him and racking up 11 possessions.

Richmond again dominated the possession and inside 50, but, like the Carlton game was wasteful and again amassed a 10 points for the half and only finishing with 8.10 (58). Richmond really need to review this, yes some are rushed but easy set shots not taken can really hurt the team as this builds momentum and kills the mindset of the opposition if you pile on the goals... If we had and finished more like 12.6 going into the half i believe we would have finished them off in the 3rd. 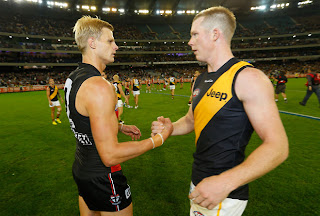 The second half showed much of the same although the Riewoldt battle heated up with both going head to head.

Trent Cotchin in his usual self shook off the tag placed by Clint Jones, only having 9 possession's to half time Trent amassed 22 in the second half to finish a top with 31 possession's for the game.

Richmond showed more poise this week in the latter part of the final quarter, against Carlton last week they looked worried and were nervous when attempting to move the ball out of their backline, this week they looked a little more settled and were able to counteract the Saints push and keep them at least 10 points clear. 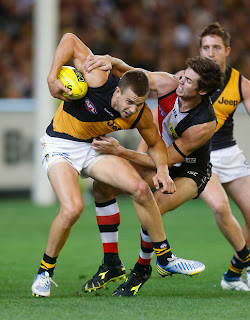 The Tigers ended up getting over the line by 17 Points, for me, this was closer than I believe it should have been. The Tigers took over the lead in the 1st Quarter and never gave it back, at times were very wasteful in their shots on goal but also hitting the target.

The biggest worry for me Friday night was the ease in which St Kilda dominated us in marks in our attacking 50. We constantly bombed the ball in long or went towards a pack only for our forwards to be out of position and the tall saint defenders taking the grab.

I don't think this will be an issue against the Bulldogs this week but one to watch out for when we face Collingwood the week after...

Disappointment's: For me there wasn't alot to be disappointed with other than the marking inside our attacking 50 (yes I say this despite the big grabs by Jack, Jake and Luke...)

Jake Bachelor was ok but often looked for the player in contests rather than keeping his eye on the ball, which led to a lot of marks against him and easy shots on goal.


Ty Vickory was not impressive at all, which is a shame as last week against Carlton he found alot of space and took some great marks, maybe he's feeling crowded with both Jack & Luke there? 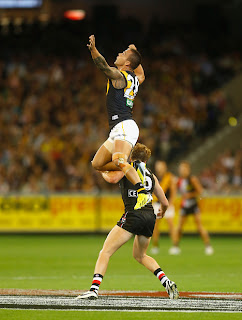 Positives for me: Well there were alot, Troy Chaplin played well in only his 2nd game since moving from Port. Jake King really impressed and was unlucky to pull down mark of the year. Luke McGuane is making a serious push to be the 2nd key forward to Jack Riewoldt, Grimes was great in his first game back since injury.

They big winners for me though were Ricky Petterd, Reece Conca and Trent Cotchin.

Trent showed why he is one of the favourites to win the Brownlow this year, yes tagged early but a great player knows how to shake off a tag and that he did, massing 31 possession's and being a big influence.

Reece Conca, I'll go down as saying that's the best game he has ever played for the Tigers. Alot of people have always had huge raps on him, me not so much as I think I was always overcome by the likes of Cotchin, Deledio and Martin as being the next youngsters to shine.. But I'll happily say that Reece was in the Top 3 of being best on ground. 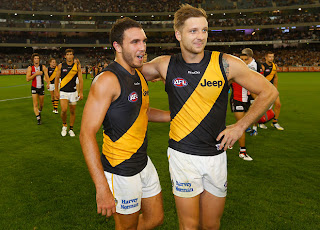 Ricky Petterd, alot (critics/supporters) didn't like his invitation to pre-season, I always liked him though and thought Melbourne were stupid for getting rid of him last season. Ricky's presence and foot skills really helped us out and I would also put him in our top 3 best players considering it was only his first game for us too!

So, Tigers are sitting 2 wins and 0 losses which hasn't occurred for 16 years, We shift our sights to the Bulldogs this Sunday and hope to push for 3 straight wins. 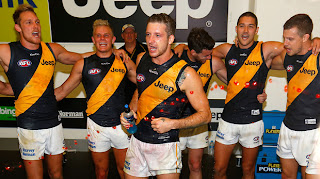 If you're not yet on board as a member, get on now. Even if its just an interstate membership which I'm on, costs around $75 each year but your financially apart of the club and more importantly another tally to the clubs push of 60k+ supporters!