Now I want to dedicate the one article to the great man that is, Shane Tuck or Tucky as most of the fans like to call him. 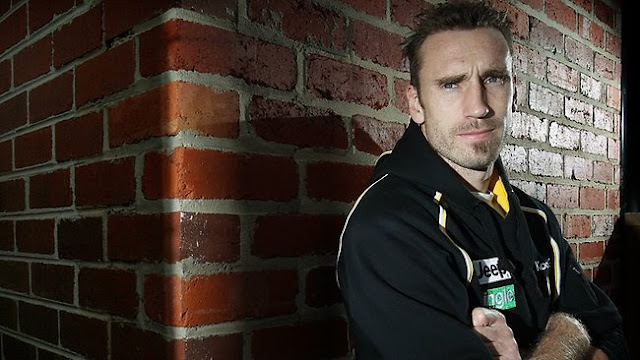 Tucky for me was one of the most underrated players in the Richmond outfit, over his years at the club he's had to time after time prove his value and for me has worked the hardest in some time to constantly show why he is as great as he is!

Shane began his career with the Dandenong Stingrays where he showed early his ability to get the hard ball gets - was on the watchful eye of Hawthorn Footy Club under the father son rule and was added to their rookie list in 2000. He spent many years on there playing in the 2's but couldn't quite catch a break and was finally delisted by them in 2002 and moved over here to Adelaide in 2003 to play a season with West Adelaide. 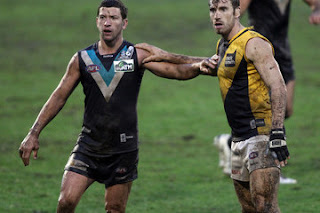 All reports in that year pointed to a much rejuvenated player who had learnt a great deal under then coach Shaun Rehn, Rehn had huge raps for Tucky. News spread and the Tiger scouts sent report after report of a son of a gun ready to be drafted.


In the 2003 National Draft finally, Tucky was reborn taken with Pick 73 by the Richmond Tigers. In my humble opinion, its one of their better selections i've seen in the last 13 years. We've seen some real spuds selected even higher than Pick 73 and its always a real delight when someone low in the order comes out as good as Tucky. 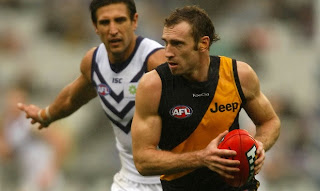 Shane made his debut in Round 14 of the 2004 season up at the Gabba against the Lions, sadly he would only play 2 more games that year as the Tigers also struggled. The club shortlisted Tuck as one of two players to retain for the next season - it came down to Tucky and Tim Fleming, as Tucky was only 22 the club took the punt and re-signed him, best decision!

To top off his transformation as one of the clubs best ball getters, Tucky received the Tigers Best Clubman award and finished 3rd in the Best & Fairest for 2005. He had also started to receive a big following... 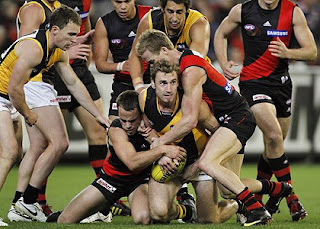 Tucky's tenure at the club has been at the foremost of discussions and controversy for many seasons now, on several occassions Tucky was sent back to the 2's for a number of reasons, at times his disposal could let him down and he would fall out of favour.

2011 was the moment we all worried for his future, he only played a 10 games and fell right out of favour with new coach Damien Hardwick, from what I understand Tucky was issued an ultimatum to prove his worth, learn from mistakes and implement in the 2's. He returned in the final 5 games and proved his worth, a big preseason helped us witness the resurgent Tuck and he ended up playing 22 games and racking up the posessions! Again the Tigers would miss the finals but the signs were there it would not be far off.


2013, the season the fans, the media and the rest of the footy public saw as the year the Tigers would break their long finals drought and players like Shane Tuck would finally get their taste! 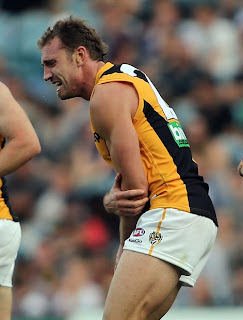 Tucky started this year well and was a constant addition in the clubs starting 22 however it was the Port Adelaide game which would be his letdown, in a tough clash Tucky injured his shoulder badly and moved to the bench.

Most players would have given up and put themselves first, Tucky, not wanting to muck up the teams rotation, returned to the field - in absolute agony. All of us supporters could see it, each time he lifted his shoulder he would grimmace in absolute agony. We felt for him but he earnt big respect from us all in this game, he only ended up with 15 disposals but he would play a pivotal role in the 41 point away win which would help shape our beloved Tigers destiny, of playing Finals Football!

Sadly, Tucky would miss the next 10 games.

To the Tiger faithful came the next announcement, the great man Shane Tuck announced his retirement 2 days before the Round 23 clash with Essendon. To some they weren't suprised, others were shocked thinking he had atleast one more year in him. 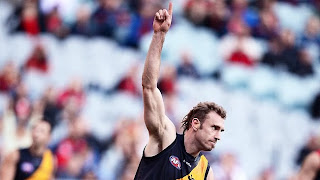 The Tigers finished 5th in 2013 and Tucky, along with the majority of the football club, would see their first finals appearance. Sadly however after a strong first half, the boys fell over in the last giving the game to Carlton, an early exit after such a big year. Some will say finals inexperience, some will say poor management on the day. Personally after the pain wears away a bit I'll disect it and put it in another article.

Alot of us stayed and helped clap off Shane in his final walk off the MCG, no carry off by the players just a humble salute as he walked off the ground, sort of fitting considering the man he was - very humble in his approach. As I stood clapping, further tears fell in appreciation of how great he was and how he left an impression on the players, supporters and football followers alike.


Shane Tuck to me is a great man, I don't know him personally, I imagine personally he would be a top bloke, very family orientated and always there for mates.

What he did for my family shaped my overall view of him. In 2008 I took my son to the football for the first time, we sat in the members and watched as the Tigers and Port Adelaide matched off against each other @ AAMI Stadium, at 3/4 time we led by 28 points until Port made a spirited fightback - we ended up winning by only 4 points.

It was then as the song was being sung by the crowd that we noticed the players were beginning to spread out and take footballs out to the crowd. I told my boy Noah to stand up and wave your hands to the players on the off chance they come to you. 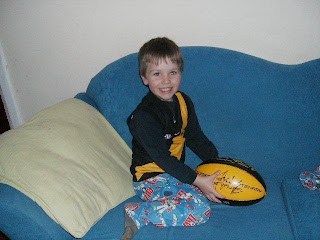 And that they did, we looked up and Shane Tuck was jogging over, he saw little Noah and you could see who he wanted to give the footy too. He jogged over, handed the footy to my boy and ruffled his hair and said there you go mate. My boy was in shock and couldn't believe it, I couldn't either, his first game, he gets the win and a signed football.

I know it wasn't all Shane, the football club launched this great initiative and its done a hell of a lot for this clubs image. But Shane's gesture of giving it to my boy has gone a long way into ensuring he's a Tiger for Life.

Ever since he's had a real soft spot for Shane Tuck, has leaned to Trent Cotchin as his favourite but always loves watching Shane also. Noah was luckily enough to see Shane again not long after and had his photo with him - we mentioned to him of the lucky night and he was quite happy to chat with Noah (who was a bit shy at that stage hahaha). 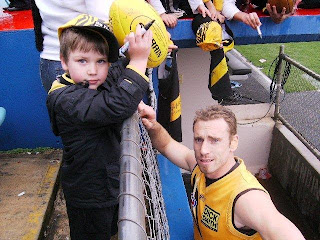 I wish we were able to give Shane a better send-off than we did last weekend, when I used to coach I liked referring to players like Shane Tuck and Trent Cotchin. Shane for his hard ball and contested footy, he has a real hard knack of just getting in there and getting the ball on the bottom of the packs, hitting it hard, bouncing off and pushing it forward any means necessary. Junior hard nut players can learn alot from Shane's approach to the game, but also those who doubt themselves or aren't making the regular 22.

Shane has shown that if you listen to your coaches and support around you, you can transform your game to conform with what is required. Training and listening is the key - train hard, work on the minor issues and listen to feedback on your game - don't dismiss people's opinions if they've taken the time to give you constructive criticism.

So - in the end Shane Tuck played 173 games for this great club, overall averaged 23.4 disposals per game and kicked a total of 74 goals.

He leaves the club as one of our top midfielders in a time where everything is looking up at Tigerland, we broke the finals drought and he's paved the way for younger players to step into his mould and lead as he did.

Good luck in your retirement Shane and all the best for your future, thank you for everything you've brought to the club and thank you for your absolute grit and determination which has made you one of the fan favourites. 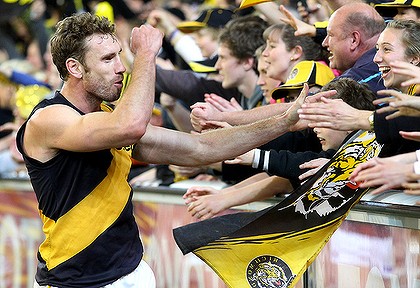