Trent Cotchin - The Future of Tigerland

Trent Cotchin to me is how i would want my junior players model themselves on for their development. 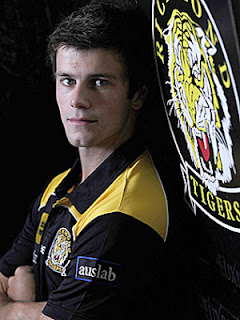 Trent epitimises the hard work ethic and using your footy brain rather than getting caught up as a midfielder that just tags other good players out. 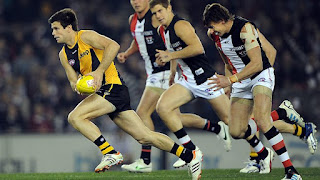 His work rate and team ethic is one i haven't seen at Richmond for some time. I remember one game i watched with my son, Trent was off the half back and ran past another player to receive a handball, he then short passed it across half back and continued to run past and receive another handball, he handballed it up to another player whilst they manouvered around the opposition.

Any other player would have stopped there and caught their breath, not Trent Cotchin, he continued to the opposite wing and created space to then receive the ball back and eventually deliver into the forward line for the new Coleman medalist Jack Riewoldt to get onto. 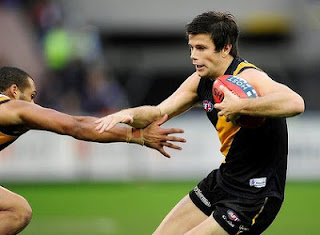 That one passage of play is what caught my eye the most about Trent and why i have such a huge respect for him, his effort across that half back is something he does game in game out, not just in that area but all over the ground.

Funny the games he has off form and not as much of an impact he still manages 30 touches...

Richmond right now are on the cusp of breaking the finals drought, its no wonder supporters like myself are so passionate and excited for the future and the present.

This year we missed by just a few games, yet i count atleast 6-8 games we lost by under 2 goals, atleast 4-6 of those were in last few minutes...

We have the players to really break this drought and make a real impact on our future, just one finals appearance will do so much for this club, not just to finally taste finals, this will catapult us into a sense of what we've been yearning for... This isn't just for the players, i'm talking the club in general, supporters, administration, players etc.. 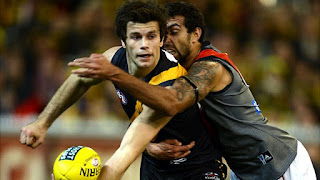 Players like Trent are what Finals & Brownlow dreams are made of, he thoroughly deserved his Richmond Best & Fairest and I can see he will win many more in the years to come, Get around him too for Brownlow this year, if he doesn't win it like i think he will, it will come in the next few years.

Should Trent take over the Captaincy from Chris Newman who just recently announced he is stepping down from the captains role, Absolutely, Trent is the ideal captain, yes concerns are his age only currently being 22, however he is far more mature in his years than most give credit for. Everytime he enters the training grounds or the ground on gameday he enters with team in mind, not individual growth, team.


I can't wait to watch him over the next ten years as he is what will drive our success.

(Photos courtesy of Herald Sun & The Age)
Posted by Unknown at 4:03 AM