The previous School Holidays arrived with a bang and the kids were busy either heading up to their nanna's for a holiday or at their Vacation Care - my wife also took off a fair bit of time too and whisked the kids away to the local swimming centres or movie's!

We learnt however our local Vacation Care was to be shut for a considerable amount of time over the Xmas break, in fact not re-opening until the 13th of January - which majority of you will understand this is not helpful for working parents...


So we decided I would apply for leave for three of the days in January before the centre opens again to help out.

I was a bit apprehensive of what to do, the obvious was already decided for the Thursday - The Ice Arena at Thebarton - this is a family favourite, my son who is now 10 loves ice skating and is really quite good at it - he was even thinking of taking up Ice Hockey... My daughter who is 6 has only been two times but wow - what a natural! The first time she spent a bit of time on the learners rink but within 20 minutes was pushing for a go on the big rink - she now skates just as well as her brother and is now asking for us to put her in figure skating... 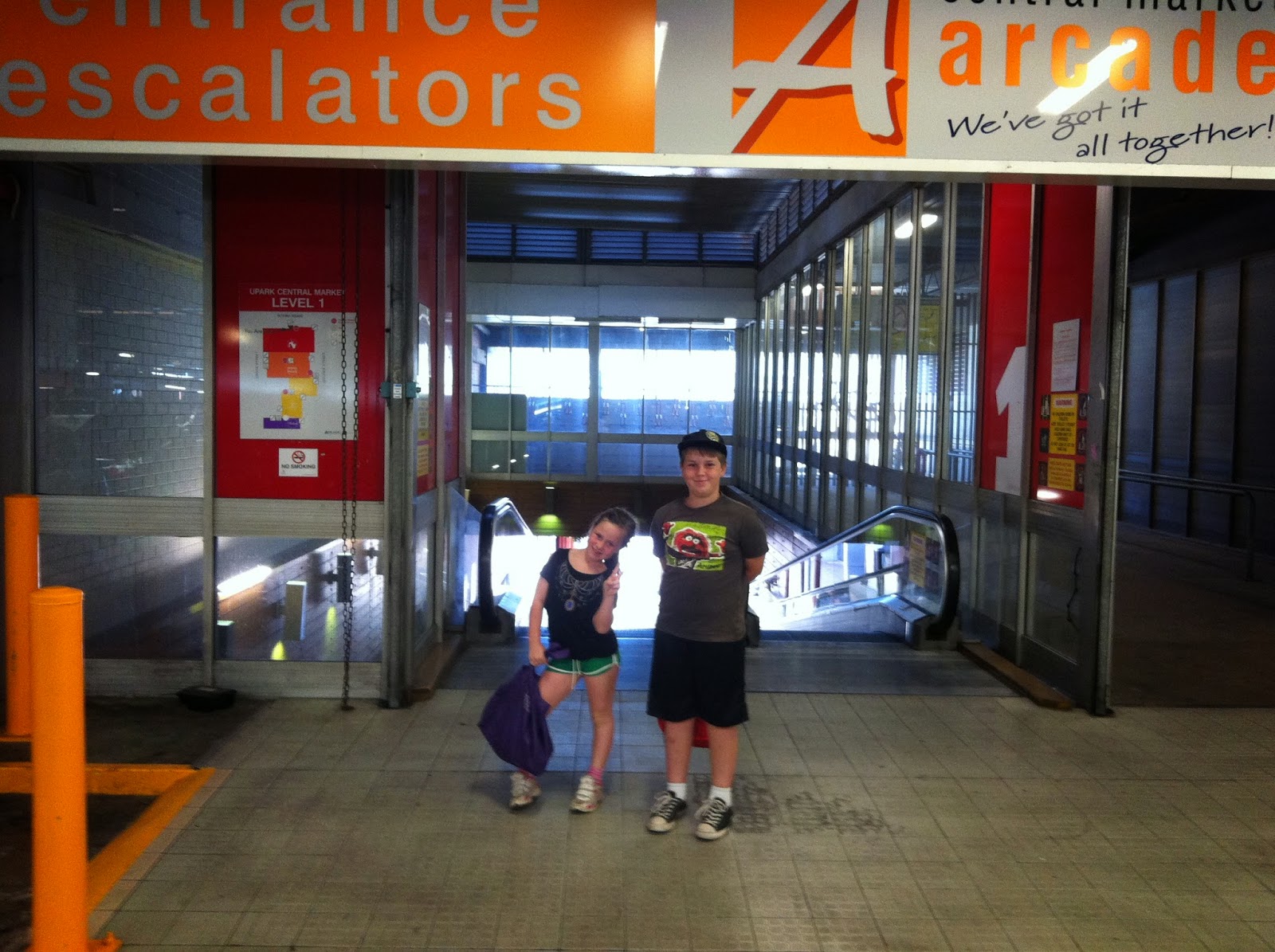 I still had one other day to come up with an idea, the Wednesday.

With a flash of genius I thought, how about a Treasure Hunt! I know I know its a game that has been played for 1000's of years but I couldn't think of a time I'd ever created a hunt from scratch for the kids.

So I decided to take them to one of my favourite places in Adelaide, The Central Market. It is full of everything food wise you could hope for - and and awesome chance to teach the kids a bit about unusual foods which they've never seen or tasted before.


For a while there a friend and I would walk to the markets at least once a week on our lunch break, takes about 5 minutes to walk there - we don't always buy stuff but its just fun to walk through and look at all the different fruit, small goods and seafood mustered in one building!

So I printed off a Map which was available on the Central Markets website: http://www.adelaidecentralmarket.com.au/map/ 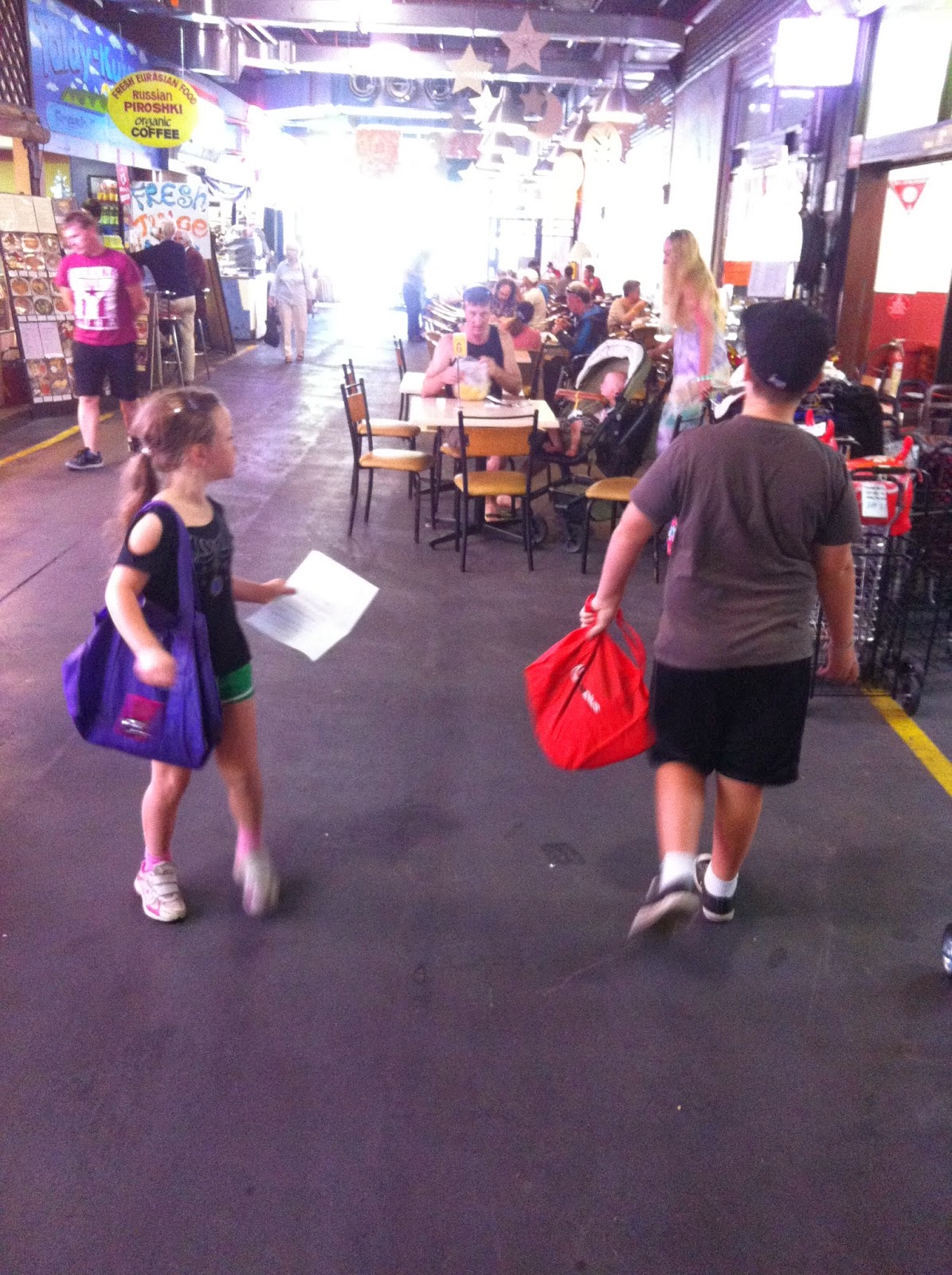 Ok I'm getting excited, for locals its probably not as used but for tourists and visitors this is perfect for someone researching a trip to the markets for the first time, or even to work out where they bought an item they loved on their first or second trip and can't remember who it was!!

I started coming up with a list of ideas and items the kids could hunt for, sure its easy to give them a shopping list and say go but where is the fun in that? One of the main aims for me was to get them to work together to get the job done, most parents will agree siblings don't always see eye to eye nor always prefer to work with each other to get the job done...


Ideas came flooding in as I remembered stalls as we walked through them, such as mud crabs, macaroons, pig's heads (i know grose..) and all the exotic fruit we've often walked past and thought "wonder what that taste's like".

So I came up with this:

The night before I charged their cameras, had a bag and a water bottle ready and put in their bag a Map each and Hunt Questions. 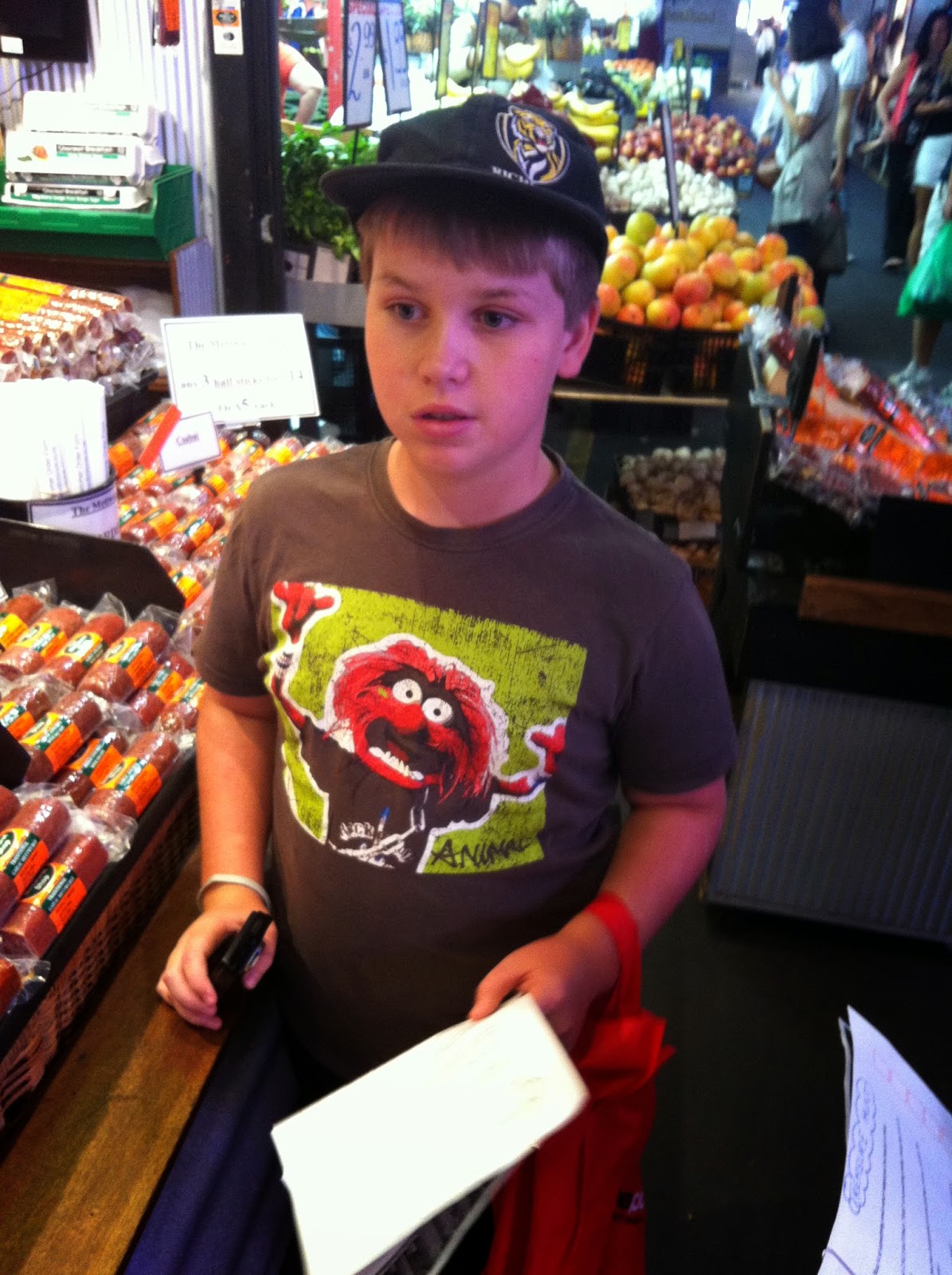 I told them on the way to the markets where we were going and what we were up for and gave them each a chance to look over the questions - instructions were though, no discussing before we get there. The Questions were loaded with cryptic messages packed in with Dares and photos required.

The kids were quite enthusiastic and we began our hunt well, the Minion Banana question was quite easy, I should have watched Despicable Me 2 first... But easy ones thrown in are good as some were quite difficult.


Most parents will say they have smart kids, I'm the same, we have somehow combined to create two of the smartest kids around, sometimes can be lazy but what kids aren't! I wanted them to use their brilliant minds to problem solve. Worked well - almost too well, most of the ones I expected to be hard even for an adult the two were knocking them off in quick succession..

Tragedy though, the famed Pigs Head which is usually at O'Connell Meats was not there.... Every time I walk through the markets there is a pigs head proudly displayed in the window - someone buys one each time, not sure I would but its funny to look at. The dare for this was the kids to take a selfie with the pigs head - something their mum would not be too keen on haha.


Sadly there were no Mud Crabs either, not sure if out of season or what but like the pigs head, mud crabs are prominent each time we go to the markets.

To top it off the awesome macaroons I planned to get the kids to try were all out of stock in the first isle, but we still managed to try some at another shop near the coles. 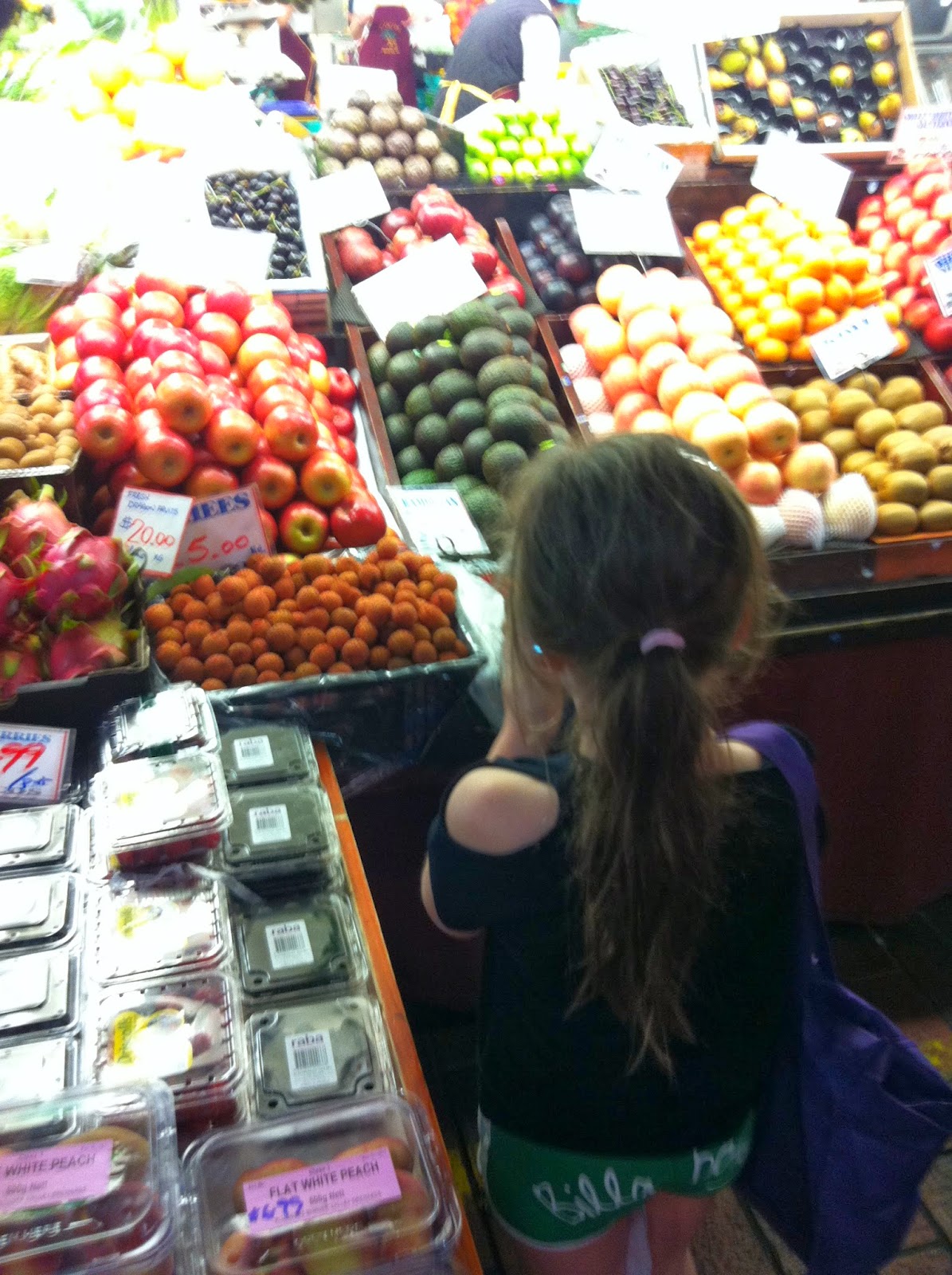 Somehow, my family is no big fan of seafood, yet I absolutely love it... so getting them enthused with some of the riddles involving them going into the fish markets were hard at first due to the "fishy" smell "dad!"... but once we headed around to Samtass Seafoods that all changed, so much better presented and that fishy smell my youngest was complaining about was completely absent. Here they managed to find the famed nanigui, or Red Snapper as its also known as. They were both fascinated by the rich red colour of the fish but also its massive eyes - they each took a photo for their album and we pushed on. A quick "who wants to try an oyster" didn't go down well as they both proceeded to bolt out of the shop.

In all I think we all had a great day, although my boy isn't a massive fruit and veg fan he still had fun learning new things and exploring the markets - hopefully experiences like this will help his phobia of good foods. My little one is the opposite and loved the markets too - it was a good family experience and a nice way to kill 3 or 4 hours!

Hindsight I think I should have not given them all the questions before we got there, I think if we do this again I might print off the questions individually then give them once each one has been answered - this way they both have to read it together and not have it pre-known in their minds before they arrive.

I encourage anyone with children, and, who is keen on fresh produce and teaching the kids new things to give this a go - head to the Central Markets Website (http://www.adelaidecentralmarket.com.au/map/), print off a map and start exploring. You don't have to even make it based around riddles - just go up and down all the lanes!

If you do attempt it with your children I would suggest though to add little ideas like the quiz or even a list of stuff they have to find so you can buy - if not that amount of time they may get a little ratty by the end :)
Please if you do try this please comment and let me know your experience!
Posted by Unknown at 7:22 PM