Well I intended on seperate articles for the two rounds however was very sick last week with the flu and barely moved from the couch at all...

Lets get started with Round 22 with the trip to Sydney to tackle GWS: 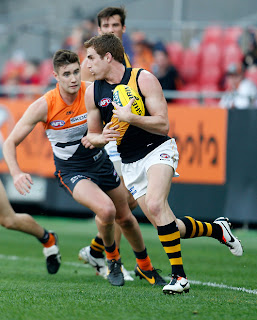 Shameful to say this I was a little worried heading to GWS for this game, not sure why in the end but thought geez we could be in danger - 2 and a bit hours later I knew that was a complete laugh. Actually prob 40 minutes in...

I was really pleased to see Aaron Edwards get another chance, he is a real force to have on our side as the third scoring option - I think he needs to be a regular if we are to be a team to go further in the finals than just the first round.

GWS to their credit started well getting some good score on the board early, but that was about it for the rest of the game, a good start and then fell apart from there.


Jeremy Cameron is touted as one of the best forwards in the game, only young too, any team in their right mind would go for him - I really hope he's a Tiger one day! Sitting not far from the potential Coleman Medal - Alex Rance has his work cut out for him.


By quarter time the Tigers held the lead by 10 points but the signs were there they were about to unleash.

And Unleash they did! They massed a huge 11 goal term for the 2nd quarter with Aaron Edwards amongst the goal kickers as the Tigers pushed out to an 80 point lead.

GWS put on 3 goals during the 3rd quarter but it was by far not enough as the Tigers added another 10 goals in the last half to secure a 121 point win, one of their biggest and best. Ok its against GWS but it was the way the Tigers controlled the ball in every area of the ground that was the noticeable factor.

Alex Rance was superb down back keeping one of the Coleman favourites goalless, Troy Chaplin was his partner in crime taking many marks down back and rebounding nicely. Dusty Martin, off the back of one of his worst games as a Tiger put in a real solid effort and for most was best on ground, Ellis and Conca were great in patches. 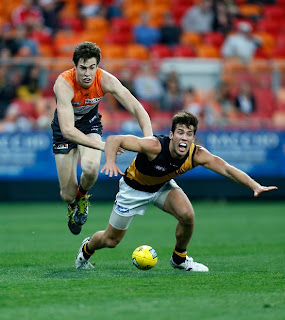 For me it was the emergence of Aaron Edwards, 5 goals but looked ominous up forward - as I said earlier, he will be a great addition heading into finals.

Cotch was subbed off in the 3rd quarter which was a wise move, why risk the captain when we are so far infront...

Best for me was Rance, Martin, Conca & Edwards

Really, most will agree, the Tigers weren't in full flight, most of the time they moved the ball around slowly like a training drill. It looked very half pace at times as they moved the ball with ease - almost resembling a circle work drill we do at trainings! 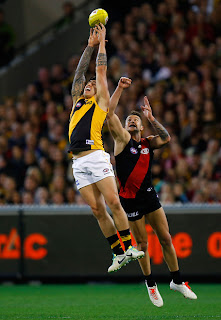 This week the Tigers took on the much talked about Essendon team, the Bombers are satcherated in the media and everything social media with the Drugs controversy, In the end the AFL handed down a rather small punishment compared to what most were expecting.

No finals, $2m fine and some other small smacks over the backside. Hird is out for 12 months but in true AFL fashion they went soft, allowing him to coach if they make the finals in 2014. Noticeable thing was Hird is not banned from the club like they did to Trigg from the Crows.

What annoys me is Watson retained his Brownlow despite his admissions and the fact the AFL had evidence of the drugs used the year he won it. To me, he should have been stripped.


Demetriou's involvement too seems to have been whiped clean as the head with his exorborant salary gets out of jail, one might think the early plea allowed him to miss any information being released should it all go to court... Early acceptance by the Bombers looks to have kept him in his job, despite the poor performance he has had since his early tenure.

Ok enough of the Bombers and the sad state they are in. 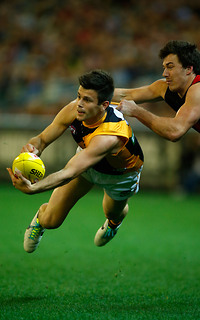 Tigers were favourites which for me was suprising considering the Tigers were easing their way towards September and the Bombers still had alot to play for, respect.

But from the start of the game the Tigers controlled the ball, adding early goals and capitalising on poor turnovers and kicking for goal by Essendon, one missing from inside the goal square...

The Tigers however did enough to control the game and take charge in their way, not the Bombers. However the controlling environment made it for a scrappy event with the scoreboard not ticking over as much as the crowd anticipated.

The game opened up in the 3rd with the Tigers kicking 6 goals to the Bombers reply of only 3, the big winner though was Daniel Jackson and Dusty Martin, they were both fantastic in the 3rd amassing possessions and dominating their opposition players.


The third quarter also brought in the crowd favourite, Shane Tuck, who earlier had announced his retirement of AFL, hopefully this was his decision and not the clubs as Tucky, in my mind, could play another 2 years easily! He has been a favourite of our house for some time and all the supporters love him. 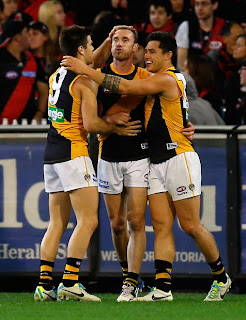 Over the coming weeks I'm going to put together a piece on Shane - also what he meant to my boy Noah!

The loss however was the hamstring injury of Matt White, Matty has his favourites in the Tiger army and he's had his doubters, I'll admit - I was one of the doubters at the start of the year and even suggested he should be trade. I'm happy to admit when I'm wrong.

Vickery was instrumental in the 3rd bagging three goals and really making problems up forward, it's good to see his is showing his value as alot of Tiger supporters around the traps tout him as the next Brad Ottens and one of our key players for the future.

With the siren going the Tigers went to the three quarter time huddle with a nice lead of 37 points, should probably be up by more though..


Being up by 37 I half expected the Tigers to apply the brakes and cruise to a victory but there was still a bit of fight left in both teams, Daniel Jackson and Jake King being the instigators, Jacko copping a knock from Melsham and the claret began to spill.


Edwards knocked in his 4th for the game giving him 9 in the last two games, lets hope this is enough to see him in the game against Carlton! 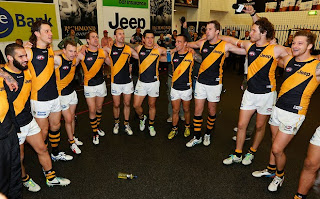 All in all it was a great game, Tigers, who most of us wouldn't have been dissapointed with the loss, came out on top by 39 Points. Edwards & Vickery were superb up forward kicking 4 a piece, whilst no Riewoldt.. Brandon Ellis was again showing how far he's come this year racking up 35 disposals, Jacko, who alot tip will be the Tiger Best & Fairest this year was also extremly valuable with 30 disposals and 2 great goals! Cotch, Martin & Deledio were all great collecting in the high 20's for disposals but were also instrumental in the midfield domination.

Well, we now look to our first Final in 12 years, as I write this now the shivers down my spine, slight tear in the eye and nerves as we prepare for Carlton on Sunday at the home of football, the MCG.

Crowd expecting to be above 90,000 and near capacity, here's hoping the Tiger Army is in full roar and the weather god's bless us with a beautiful sunny afternoon!