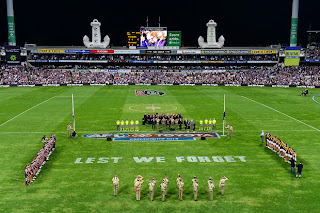 Spent alot of time stewing over last weekends game, alot to think about, mull over and piece together why the Tigers fell over so short in the West.

From now, and i'm sure you will already know, the Tigers lost by the solitary 1 point. Some say it should have been by more, part of me agrees, but then alot of me suggests the Tigers should have infact won by more than 20 points, I'll detail why below:


The Tigers kicked of the game in style, another early goal and they dominated the midfield early. Cotchin was being tagged but was being aided by Brett Deledio. Martin was getting his hands on the ball and the debutant Nick Vlastuin had all the Tiger faithful cheering as he delivered two telling tackles to stamp his name into the team and show just why he is touted as the next Trent Cotchin. 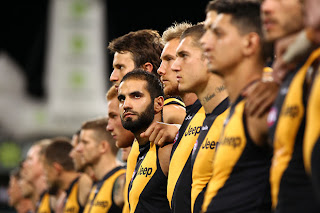 Yes things were looking great and the Tigers were doing something this time around they hadn't all year... making the most of their goal opportunities. No easy goals missed which is a positive in itself as I've said all year, we've had chances to bury sides but mucked around and left them lingering around too long to finally wait for them to get a sniff.

One thing i've learned, and as much as I hate him, Ross Lyon is good in this sort of situation. He can identify areas of concern, inflict changes or measures to counteract and contain a side. He did it to us last time we played Fremantle and he did it again last friday night. 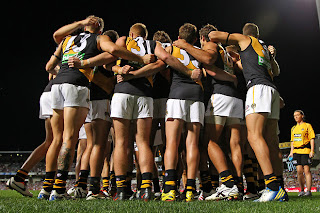 Freo's midfield began to hit the ball and the Tigers alot harder but the crucial part of Lyons puzzle was the Tigers half forward line. At the beginning of the second quarter Lyon instigated his game winning change, stop access to the forward line. His troops managed to put alot of pressure on the Tigers and his half back line managed to contain and minimise the amount of inside 50's and scoring opportunities.

Look whilst this was the case, the Tigers were not out of contention. The midfielders and half backs with their usual run out of defence then found it tough finding a target as the tall fremantle defenders stood tall and closed off most of the attacks. 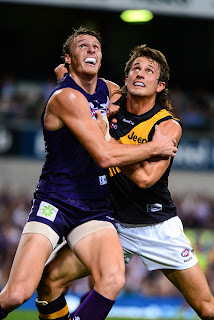 This continued through the third quarter as our Midfield and more importantly, players like Dustin Martin went missing. Big Ivan fought hard but like the second quarter the Tigers were simply not finding easy path's into the forward line for us to be rewarded for hard work.

The fourth quarter was something different, you could sense the Tigers were close to mounting an offence but needed to sort out a few issues first.

Towards the last half of the final term the Tigers began to find avenues through the defence and began to pile scoring pressure on the dockers, the Tigers pushed three through the big sticks including a gem of a goal by Matthew White from the boundary line.

But, by far the worst incident (well close to) of an umpire in some time occurred, before Matt Whites brilliant goal from the far boundary line, he attempted to slot virtually from the same position a bouncing goal infront of a lunging Ty Vickory. 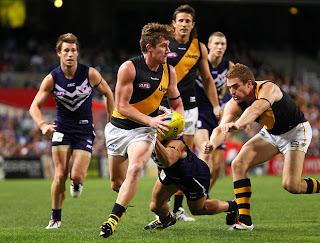 I haven't reviewed the official rules, nor do I care, the fact was, this little maggot of an umpire knew full well the ball had hit him, knew it was going through for a goal yet did nothing and proceeded as if nothing had happened. He had, as well as the field umpire and the other maggots sitting in the review booth, full control to call for a video replay to determine the truth behind the play.

No, this goal umpire instead pretended like nothing had happened and yes of course, Richmond go on to lose by 1 point.

Matthew Richardson, the great man, best summed it up in his regular article on the www.richmondfc.com.au website:

"Get the technology right, or get rid of it.  As it currently stands, the system is simply not working and it’s detracting from our great game.  Until such time as the proper mechanisms are in place to make correct judgments, go back to the way it was with goal umpires left to rule on their own." 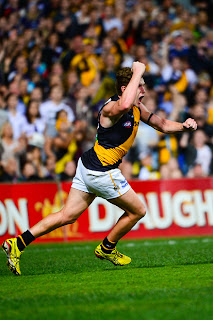 People can argue til their blue in the face but the fair thing would have been a goal rewarded.

I am sick to death of this AFL and the people sitting in the rules committee and governing bodies, they're ruining our great game and introducing stupid rules to combat smart teams tactics. I know no other competition in the world that has as many yearly rule changes as our sport. I know no other competition that punishes a player who puts his head on the line, does the hard effort to get the ball but is then punished because he came in contact with the opposition player.

Yes I know it is to combat leg injuries but when you look at the statistics just exactly how many are we saving, 1 in 100? - Pathetic.

Reward and protect the player with his head down going for the ball, not the individual that is clearly going in to deliberately make contact with the player...

That's me on that issue, stop ruining our game and leave it be...

I think the definite positives to take out of the game was the debut of Nick Vlastuin, Chris Knights racking up 20 possessions and 3 great goals and also the re-emergence of Brandon Ellis.

So - Tigers now return home to face Geelong, Geelong are red hot at the moment in terms of win loss record but I still firmly believe they are very vulnerable. I don't think they're travelling as well as the ladder shows - especially when you compare the playing list against their prime..

I will be taking a breather next week so no round up for this game, this is due to myself being involved with a Race Meet at Morphetville Derby Day where we expect to make lots of $$'s but will drink our fair share also. I will be watching the game more likely at the Adelaide Casino but may not take in full analysis... 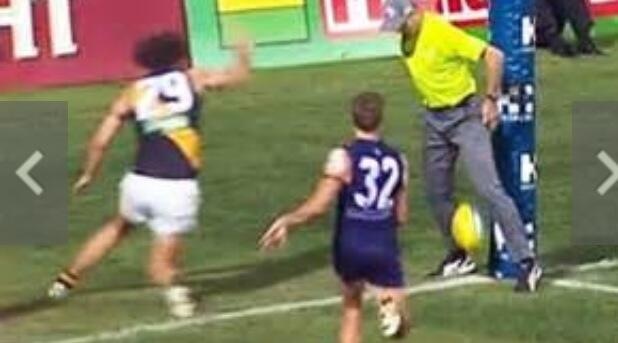