Whilst we anxiously wait for Round 3's Tigers clash against the Bulldogs I want to share with you some of my favourite footy flashbacks.

Growing up in Adelaide I never had the opportunity to build flashbacks of finals, grand finals or the 1st game of young guns whilst sitting at the MCG cheering on, instead I grew up coming from an SANFL background.

Misguided in my youth I started following the Crows in their first 2 years joining the AFL, yet I never had a favourite player and didn't get a chance to go to many games.

Towards the start of 1992 I started to follow Richmond closely, still not a full fan but had this feeling of really liking this team. A friend from school was a huge Tiger, he grew up in Melbourne and moved to Adelaide before he got to high school. We became good mates when he moved to my school and I found his passion for the Tigers was growing madly within me.

By the end of 92 I was ready, Begun my move to Tigerland has. (sorry tried to sound like Yoda from Star Wars..) 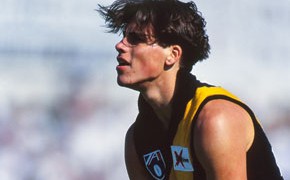 Anyhow 93 I witnessed the first game of probably the best player I've seen, Matthew Richardson. Enter my full passion, now I was following Richmond but more importantly a player which i'd drop everything to go and watch.


From that point on there was no going back... what had I got myself into... I later learned the history of the club and its depression since 82, sitting here now i've seen my team reach the finals only twice, poor Richo has retired but we are on the verge of our first finals campaign since 2001. Good times ahead.

The path of being a Tiger has never been easy, I witnessed some shockers with us losing by 15+ goals, one here in Adelaide where Modra kicked 10+...

But I've witnessed some real spectacular wins also and close games, the game I'd like to share is one of my favourite games i've ever been too.

Back in 1998 I started working for the SA Law Society, back then I was a fresh 19 year old still looking for work but never went onto Uni like most did. I found it tough as I had no experience, great with computers but noone would hire me as "sorry you don't have experience"... towards the tail end of my applications my response was, yes, until someone gives me a chance how do I get experience!

It was pure luck I found myself at the Law Society as part of an opportunity that came up through Work for the Dole. Somehow they found a small role there for me to start off with which then turned into receiving a contract for my first full time role. A few months into the position I made alot of friends and copped alot of grief from them being a Tiger, proudly displaying my Richmond desk flag for all to see.

May was approaching and I was really keen to go to the Adelaide v Richmond game but as Adelaide was realing in Crows Mania majority of the games were becoming sell outs so near impossible to get there.

By chance someone I worked with (who I still didn't really know) had a friend who was a season ticket holder and yes.... had a spare ticket. I jumped at the chance as I all I wanted to do was watch the Tigers, I had a inkling we would win but not 100% sure...

I met up with the unknown Crows Supporter outside the North Western side of the ground, nice lady she was in her late 30's early 40's and she took me to my seat, western side just off the middle of the centre.

Right from the get go it was a close game but the Crows managed to pull away from us in 3rd quarter, by that stage though the heavens decided to open up on us.

Thousands of Crows supporters, except for those diehard supporters, headed for cover to retreat from the rain. I myself, was going.... nowhere.

All throughout the game the nice lady, whose name I can't recall.. was really cheering for the Crows, each time they would get near there goals she would be nudging me and then a big nudge if they kicked a goal...

By the last quarter the rain was alot harder, this is a moment I'll never ever forget. The rain was the type of downpour only described as really big drops, heavy and straight. The rain fell so vertically we were drenched within seconds.

I looked back at all the supporters, they were cuddled up in their warm rugs and out of the rain sipping on warm drinks....

Momentum shifted, the dominance of the Crows in the 3rd started to shift to the Tigers coming back. I remember our boys handling the ball like it was dry weather, they silkily moved the ball into the forward line and kept pressing until the goal was scored.

We moved to within 2 goals, you could hear the cheer of the Tiger faithful who were still out in the rain, other than that you couldn't hear any Crows supporters. A roar in the background surrounded us as the rain got heavier, the rain hitting the roof was extremely loud.

I remember one massive bolt flashing out of the sky and just like that the lights went out. Noone knew what to do and sat frozen in their chairs, I can't remember for sure but I think it was a few minutes before the lights came back on.

All the supporters undercover were shouting for the game to be called off, they were sure they had won.

Umpire blew the whistle and the game recommenced with only minutes to go.

The Tigers pushed, scored two more and we took the lead again in the dying minutes of the game, the look on all the Crows supporters was one to remember, for the Tigers supporters we were shocked, pure shock at the comeback.

With less than a minute to go we slammed on one more goal, surely that was it......

Siren went and the cheer from a thousand sounded more like 10,000!

Not being aggressive or anything like that, it was a mutual supporter moment that she knew was all ok.. She grinned and nodded her head - well done she said. 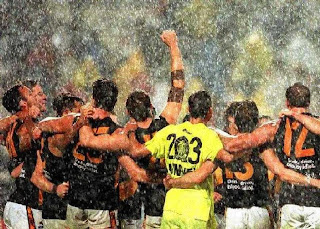 I think had those supporters not all scramble for cover and brave the weather like the rest of us I wouldn't have cared. But they made me angry that night, all ran for cover, just like their team did. So I let them know, I wasn't looking for a fight or anything untoward, I just wanted to let them know they needed to stay in their seats and support their team to the end, rain, hail or shine.

The Tigers stayed on the ground and sang the loudest rendition of our song heard interstate and with bucketing rain. The picture above shows it all, the torrential downpour, the elation and passion of the team as they fought one of their best battles.

I think for me this is one of the best I've ever seen, we didn't make the finals that year, but we did beat the Premiers at their home ground and never weakened until the final siren sounded.

It was a game that helped shape my love for Richmond, a game that sticks in your mind and you share with people and younger generations. It helped build hope that this club can be a great winning club, they just need the confidence to know they can.